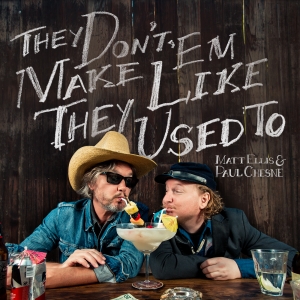 Matt Ellis is Australian Singer/Songwriter based in Los Angeles. He has just released a new single with Paul Chesne and continues to record his sixth album.

“They Don’t Make ‘em Like They Used To” is a slice of classic Americana. Lush pedal steel and electric guitar licks carry the listener over a contentious lyric as the pair call out the fading legacy of Music’s untouchable elite. The infectious melody is a sugar coating to a deeper truth both Ellis and Chesne stand by.

Matt began writing the track back in 2015, during sessions for his new album. “I knew it stood out from the other tracks I was writing, but it didn’t feel like a Matt Ellis solo track to me. And the last thing I wanted it to be was some old cranky rocker bitching about young pop stars. It needed a wink and not to be taken too seriously.” Enter Paul Chesne.

Chesne and Ellis have been friends since Ellis re-located from Australia eleven years ago. Both are based in Venice, they’re often seen performing on the same bill, and in recent years, share lead guitarist, Josh Norton.

The pair got together over a couple of drinks and added the remainder of lyrics to the arrangement in late 2015. With Chesne fleshing out the verses and the outro, the track strikes the perfect balance of cynicism, and authentic despair over the state of current music industry.

The single is out now digitally and available everywhere online.

“The Greatest Escape” - 12 new songs produced by Matt Ellis and mixed by Craig Schumacher is OUT NOW!

Matt Ellis’ new, fifth album, recorded and mixed at Wavelab in Tucson, AZ, has a new, tougher sound  that recalls the Australian Singer/Songwriters early rock roots. Based in California since 2005,  Ellis’ sound has evolved effortlessly over the past decade blending Country, Rock and Folk in the  tradition of Tom Petty, Neil Young and Ryan Adams.

Last December, Ellis and his band headed to Tucson, AZ and recorded 13 tracks over 4 days. Produced by Matt,  the live tracks were engineered by Chris Schultz and Craig Schumacher (Neko Case, Calexico, The Jayhawks).  Ellis returned home to Los Angeles, CA to complete recording, teaming up with Nick Luca (Calexico, Iron & Wine).  The pair spent the following months, setting up in multiple studios adding Vocals, Fender Rhodes, Piano  and additional Guitars, before Matt returned to Tucson to mix the album with Schumacher,  the celebrated engineer behind his last two releases.

The result is a loose classic rock feel, steeped in Americana and Folk. Ellis’ trademark voice is in fine form and  the songs have an extra level of detail, but the long list of guest musicians is gone. The band Matt put together to promote his last full length, “Births, Deaths & Marriages” (2010), is still with him, and he was inspired to build  this album around them.

A double A-Side single, “On The Horizon/Thank You Los Angeles” was released in late August.  Since the release, the band has been promoting the new songs around Southern California with a launch at The Del Monte speakeasy, a slot on  the Abbot Kinney Festival and The Desert Stars Festival at Pappy & Harriets. Matt Ellis recently launched the new album at Harvard & Stone in Hollywood, California. A tour is in the works for early 2015.

Matt Ellis is an award winning Americana Singer/Songwriter/Producer from Sydney, Australia. Based in Venice, California since 2005, Ellis has just released "The Greatest Escape", his fifth solo album, on October 21st 2014.

Matt’s four solo albums have taken him across the United States, Canada, Australia, Hong Kong and Mexico, performing at The Sydney Opera House, Troubadour, Tucson’s Rialto Theatre, CBGBs (RIP), The Bitter End, El Mocambo, Hotel Cafe, The Satellite, Pappy & Harriets and The Annandale Hotel sharing the stages with Calexico, J.Tillman, DeVotchKa, and John Doe to name a few. Album guests have included Nels Cline, Greg Leisz and Merry Clayton, while numerous tracks have been licensed by ABC TV America, MTV, Qantas and The Food Network while receiving airplay on hundreds of Radio Stations around the globe.

In Summer 2012, Matt was hand picked to open for Kasey Chambers at KCRW’s Twilight Series on the Santa Monica Pier, where the seven piece band previewed new tracks to a crowd of 15,000. His new single at the time,"Candy", was recorded with members of Calexico and Chessboxer, and launched to a full house at Hollywood’s “Hotel Cafe”. The cover received airplay on over 50 radio stations across the US, Australia and Europe. The B-Side, “Dangers of the Night”, became a finalist in the Americana Category of the International Songwriting Competition, Matt’s sixth finalist placing in the past four years. Ellis and his band continued to tour off the back of the single, recently performing a Sold Out show at The Troubadour in L.A. supporting White Buffalo. The band performed throughout Spring and Summer with festival and club dates booked throughout California, Arizona and Texas. During that time, Matt Ellis and his band were guests of AXS Live TV, where Matt discussed his upcoming plans and performed two songs live to air from Downtown’s “L.A. Live”, beaming into 40 million homes across America.

Vavine joined Matt in duet once again on the following single, “Candy”, out now on iTunes. This dusty version of the Iggy Pop hit features Matt’s band and guests Jon Niemann on Keys along with Matt Menefee and Ross Holmes from Chessboxer on Banjo and Fiddle. Mixed once again by Craig Schumacher, “Candy” is backed up by the original “Dangers Of The Night”, featuring Jacob Valenzuela on trumpet.

For bookings and further info email: info@krowpie.com
5
What's This
Advertisement