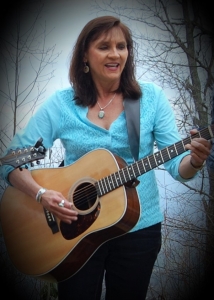 Lynn Goldsmith is a Hendersonville, North Carolina based singer/songwriter with influences from many genres, primarily country and bluegrass roots, including gospel, blues and rock. Growing up in the rural farm country of Western NC her originals feature songs about life experiences of living in the country. She has released five CD’s with her originals and covers. All the CD’s feature songs from bluegrass, country, blues and gospel. Her Carolina Christmas CD project features the original title track along with fifteen Christmas standards, and is a must for the Holiday listener. Most of her listeners have admitted to listening to this CD throughout the year, not just through the Holiday season.
Lynn takes her originals and standards on the road, and in the studio, with her band, Lynn Goldsmith and the Jeter Mountain Band. The band presents an acoustic flavor for Lynn’s music and play many Western NC venues including some on the Blue Ridge Music Trail. Band members include: Steve Briggs-mandolin, harmonica, guitar and harmony vocals, Tom Murray: dobro, banjo, guitar and harmony vocals and Mike Orr- upright bass, kick drum and harmony vocals that add to the mix with Lynn doing lead vocals, guitar and banjo. The group released its first CD Jeter Mountain two years ago and and on September 26th this year released their bluegrass gospel CD, Wake Up Children. The title track is an original bluegrass gospel song by Lynn that was divinely inspired, about the Lord coming back to get his children. It also features an original song by Stephen Briggs titled, He Set Me Free. The remaining songs are bluegrass standards that Lynn has grown up with and played for many years. The CD has been instantly popular with radio picking it up on many stations to complement their bluegrass gospel play list, and many of the live performance venues that the band plays. This CD is the heart of bluegrass gospel that stirs emotion from days gone by.
The band plans to be back in the studio in January 2019 to continue recording Lynn’s originals and popular covers that the band currently performs in the live music forum.

Carolina Christmas: Soon to be released on AirPlay Direct in time for the 2018 holiday season.