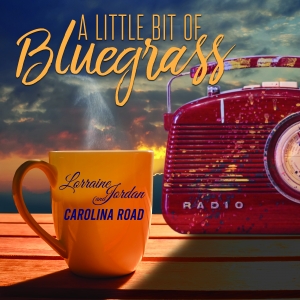 “A Little Bit of Bluegrass” centers around powerful lyrics that every music enthusiast can relate to. Written by David Stewart, the cut perfectly captures the feeling of using the power of music to heal a case of the blues, in the form of Bluegrass. It also showcases the powerful vocals of Carolina Road’s lead singer Allen Dyer, accompanied by strong harmony vocals from Kevin Lamm and Lorraine. It also showcases the world-class musicianship of Ben Greene (banjo), Matt Hooper (fiddle) and Wayne Morris (lead guitar). Between now and November 4th, Lorraine Jordan & Carolina Road have plenty more surprises in store for the project’s build-up.

The band will also spend the remainder of 2022 on the road in support of the new single. In addition to playing festivals and venues nationwide, they’ll also be hosting and headlining their annual Bluegrass Christmas In The Smokies in scenic Gatlinburg, Tenn. from November 17-19. Other nightly headliners include Larry Sparks and Lonesome Ramblers, Larry Stephenson, plus Joe Mullins, Ralph Stanley II, Paul Williams, Fast Track, Nothing Fancy, Williamson Branch, Nick Chandler and Delivered, plus many other great bands. During the event, attendees can expect to hear new performances of tracks from A Little Bit of Bluegrass.

To keep up with the latest news stories, find upcoming tour dates, and more, check out the band’s official website www.carolinaroadband.com.
28
What's This
Advertisement