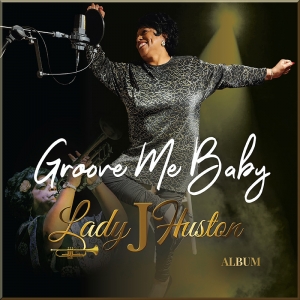 
New Double-Single Remix Releases of "Corona You Make Me Sick! & "Hide-Away" are available now for global radio to download!
The full "Groove Me Baby" album will be available to download Spring of 2023.

"Groove Me Baby" is a seductive ode to romance at its highest peak of self-indulgence & forever longing for the partner that makes you feel so good inside it makes you wanna shout! Lady J Huston's talents as a songwriter, arranger, trumpeter and vocalist with a 4-octave range is fully represented here. The song with its bluesy, soulful exuberance and moans, blends the styles of R&B, Retro-Soul & Blues that lovers will especially enjoy spooning to.

"Lady J's got her groove on and she blows a mean trumpet too! Made me get up and dance, sing-a-long and made me wanna holler." ~
Michael Frank, CEO - Earwig Music Company, Inc.

"This is a great new song. I'll add to my rotation right away!" ~ "Keeping The Blues Alive" host The Mighty Quinn, on Buddy Guy Radio Legends Buddy Guy Radio

Lady J Huston presents a different twist on the pandemic with her composition, “Corona You Make Me Sick!”. The song speaks to the human spirit and helps to release the frustration through song and dance. The energy, upbeat groove and hook makes listeners feel like partying the night away, ready to embrace our new normal. Lady J entered this song in a songwriting competition sponsored by the National Blues Museum (St. Louis) and won the competition. The original recording was released shortly after in 2021. Lady J has been a dedicated advocate for African Americans amidst the pandemic with several Public Service Announcements on CBS News, Mercy Hospital, and in the Associated Press.

Lady J met Michael Frank, CEO of Earwig Music Company in 2022 at the Blues Music Awards. She gave him the self-released single of the song. When they met up again, he was singing it, and that became the impetus for their music partnership. As Covid-19 is still challenging the world’s health, they thought it befitting to re-release the song to help foster broader exposure of this fan favorite when Lady J Huston performs.

“Hide-Away” is a true story about moving on with life in another city after the end of a love affair. Musically, it’s a Blues ballad with layers of Jazz and an up-tempo Funk interlude. Lady J was exposed to multiple music genres growing up in St. Louis and performed in dance groups, Drum Corps, Marching Bands; Funk, Blues, Go-Go Bands, & Big Jazz Bands in St. Louis, and while a music composition major with the Howard University Jazz Ensemble (Washington, DC).

Her goal was to mesh all those influences into her own 18-piece, Big Band arrangement which came into fruition with The Jazz Edge Orchestra (St. Louis, MO). The original recording was released in 2019 under the auspices of the St. Louis Blues Society which Lady J is eternally grateful for. In 2021, “Hide-Away” placed as a Semi-Finalist in the International Songwriting Competition for Blues & Performance. After joining forces with Earwig Music in 2022, they wanted to revive it with a different mix and re-introduce it to the masses.


BIOGRAPHY
Lady J Huston of St. Louis, MO, is respected as one of the most spectacular entertainers on the music scene! She is renowned for her captivating 4-Octave Vocals, Trumpet, and mesmerizing stage presence.

Lady J was inspired to sing and dance by her mother, Loyce (Pickens) Huston, a highly acclaimed songstress amongst St. Louis for Gospel, Jazz & Blues. She helped launch the careers of many musicians and entertainers.

Just in her teens, Lady J got her first taste of fame with a national star as vocalist with BMA and Rock 'n Roll Hall of Famer, Johnnie Johnson (a.k.a. Father of Rock 'n Roll piano), who was Chuck Berry's original pianist in which the song "Johnny B. Good" was written in honor of.

She then began touring the United States with the legendary BMA and Rock 'n Roll Hall of Famer, Albert "Blues Boy" King band for several years as lead Trumpeter, then horn section leader, and eventually moved up the ranks as Music Director, as well as opening act while being the only female in the band. She performed amongst music legends such as; Muddy Waters, John Lee Hooker, Millie Jackson, Bo Didley, KoKo Taylor, and many others. Lady J also performed with Albert King on the only known, fully televised, performance featuring his band on the "Maintenance Shop Blues" PBS special.

Lady J Huston had her eyes set on the bright city lights and entertainment mecca of the world, Las Vegas, NV where she resided for 25 years. This was another pivotal career advancement where she formed her dynamic band, Lady J Huston & The Fireballs. The group opened for multiple national acts as well as headlining in showrooms, concert halls, Blues and Jazz festivals, nightclubs, private corporate events and more.

Lady J left Las Vegas following a highly acclaimed musical celebration in her honor. Her career had come to an abrupt halt following a major health crisis that propelled her return to St. Louis, MO. With better medical resources and family support, she returned to the stage with The Lady J Huston Show & Tribute to Albert King that debuted at the National Blues Museum with great accolades. B.B. King’s daughter, Shirley King, joined one of her performances for a night those in attendance will never forget!

Other Career Highlights:
- Biography in multiple Marquis Who's Who of America publications
- Biography in the Distinguished Women and Men of Southern Nevada
- Featured story on ABC World News Tonight with Diane Sawyer
- On Season 3 of America's Got Talent and performed in the Finale episode with the Audition All Stars
- Feature display in the National Blues Museum's "Pandemic Blues" exhibit, and 2022 Artist Gallery Exhibit on a drawing portrait “Ladies of the Blues” alongside: Bessie Smith, Shirley King (daughter of B.B. King), Eva Taylor, Kim Massie, and Mahalia Jackson.

In June 2022, Lady J Huston debuted her Albert King Alumni Tribute Show at the Missouri History Museum. In September 2022, this prestigious group of musicians performed at the Music at the Intersection Festival in St. Louis with headliners that included: Erykah Badu, Gary Clark, Jr., Buddy Guy, Booker T. Jones, and other national artists.

Lady J is also producing a performance documentary featuring the Albert King Alumni Tribute Show and behind the scenes stories on touring with the very demanding but highly influential guitarist.
27
What's This
Advertisement