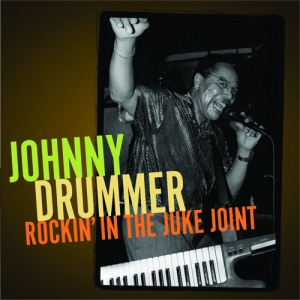 Johnny Drummer was born Thessex Johns on March 1, 1938 in Alligator, Mississippi, a small town twelve miles south of Clarksdale in the heart of the Delta. There he saw musicians like Little Milton and Ike Turner every weekend, and listened to his three brothers play hollow-box guitars on long summer nights, learning all the blues, r&b, and soul songs of the time. Soon he began singing, and at age seven joined the Kelly Brothers Band in Alligator.

His career as a musician expanded when he joined the Army and learned to play drums. In his three-year army career, he sat in on drums with bands that came around, honing his skills as a musician. Upon leaving the military in 1959, he moved to Chicago, where he began sitting in with Lovie Lee, Big Walter Horton, and Carey Bell at a bar on the corner near his house. He soon began playing drums in Lovie’s band, and later moved on to play with guitarist Eddie King.

In 1962 he cut a record for Wonderful Records, which featured Eddie King, Willie Black, Roy Johnson, Willie "Big Eyes" Smith and Otis Spann. In 1965 he got the chance to play with BB King at a club when BB’s drummer failed to show up for the gig. In 1966 he went to see Muddy Waters, and was asked to sit in on bass. He was later asked to tour with Muddy, but declined his offer, uneasy at the prospect of life on the road. He started his band and gained local notoriety in the late 1960s as the leader of a band hired by touring soul blues acts passing through Chicago. In the 1960s he taught himself to play the electronic keyboard and now makes this his primary instrument, though he also plays harmonica, guitar, bass and drums.

After gigging 60 years in Chicago, Johnny moved to Horn Lake, Mississippi in 2017. He can be seen performing in the Mississippi delta at Red's in Clarksdale and at other festivals and events.