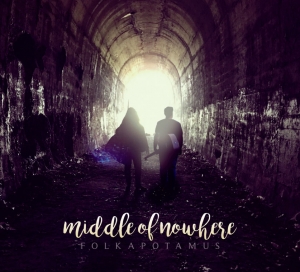 Folkapotamus is a Boston area based folk duo consisting of Penni Hart and Tony Trites. They have been performing together since 2011. Their emotional lyrics and beautiful melodies draw listeners in. Penni and Tony have performed at various coffeehouses and folk venues in Massachusetts such as Club Passim and The Burren and throughout New England and the Midwest. They have opened for legendary folk icon Vance Gilbert as well as California’s Claudia Russell and Bruce Kaplan and New York’s Davey O.

Folkapotamus’s second full album, “Middle of Nowhere,” will be released in September of 2017. It contains six new compositions as well as a classic folk song, a traditional folk song, and a favorite rock song done in their own folky style. The original compositions range from a song titled, “Road to Nowheresville” that has a good-time, sitting-out-on-the-front-porch-playing-music kind of feeling to “River Slope Mine,” a historical song about a mining disaster in Pennsylvania.

Penni was born and reared in Springfield, Illinois. She was first given piano lessons at the age of 5 and continued to study music throughout her life. She is an avid reader, which shows in her songwriting - as most of her songs tell poignant stories, some of them about family and growing up in the Midwest. In her 20s she moved to her adopted home of California and worked at the famous "Freight & Salvage" where she was introduced to all different styles of songwriting. After moving to the Boston area in 2008, she teamed up with Tony to become Folkapotamus.

Tony Trites grew up in the Boston suburbs. His love for music started at age 10 when he was introduced to the saxophone. After taking piano lessons in high school, Tony played keyboards and sax in a number of bands throughout his college years. A reunion with high school band mates led Tony to purchase a bass guitar, which he taught himself to play. Tony’s influences range from jazz to classical, to modern rock and most recently, folk.

Folkapotamus's first studio release, "Whispered Words," was released in August of 2014. It made the Folk DJ Chart in August, and was also included in the Top 600 CDs of 2014. Their debut album was also named as one of the "Top 25 CDs of 2014" by Joltin' Joe from Radio Nowhere on WMSC in Montclair, NJ, and also The Back Porch's Top 30 CDs of 2015, 88.1 WVPE, South Bend/Elkhart, IN. Chicago Folk DJ Rich Warren also named “Whispered Words” as one of his Picks of the Week in January of 2015.

Penni and Tony currently reside in Massachusetts with their two interesting rescue cats Fernando and Oliver and two budgies Tyngo and Coconut.