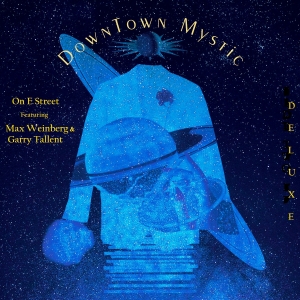 Sha-La Music, Inc. announces the release of the DownTown Mystic On E Street Deluxe album by US Roots Rocker DownTown Mystic on January 22. The album features the Rock'n'Roll Hall of Fame rhythm section from Bruce Springsteen's legendary E Street Band--drummer"Mighty" Max Weinberg & bassist Garry Tallent. The album will be digitally distributed worldwide by The Orchard/Sony Music and available for pre-order on Amazon and iTunes. The 1st single is Hard Enough.

The DownTown Mystic On E Street Deluxe album expands upon the 4 song EP released a few years back with newly remastered tracks, along with previously unreleased material. With the recent release and success of DownTown Mystic: Used Records History 1979-1985, DownTown Mystic writer/producer Robert Allen came across the original demos for the songs from the On E Street EP and decided to put together an album to show how the project came about and evolved. Robert comments, “The Used Records History project showed me there was value in what I had done in the past and when I listened to the old tapes of these songs it all made sense to release them together”.

The Hard Enough single is a showcase for DownTown’s motto, "vintage yet modern", thanks to the "old school" rock'n'roll vibe it gets courtesy of the 2 E Streeters. DownTown Mystic On E Street Deluxe puts DownTown Mystic in some very exclusive company. Other than "The Boss", Max and Garry have only backed a handful of artists together in the studio, like iconic rocker Ian Hunter after he left Mott The Hoople. Of course, Steve Holley and Paul Page, the accomplished rhythm section for Ian Hunter's Rant Band have played on all the DownTown Mystic albums. This gives the rocker and Hunter the rare distinction of being the only 2 artists to ever record with both rhythm sections.

Two songs on DownTown Mystic On E Street Deluxe are well known in Radio and TV circles. Way To Know has had big success at Radio worldwide going to #1 on Indie Charts in the US and Europe and is one of DownTown Mytstic’s most sync-licensed tracks, appearing several times on NBC TV's The Voice. The emotionally charged And You Know Why caught the ear of Top LA Music Supervisor Alexandra Patsavas/Chop Shop Music who placed it in the short lived TV series The Carrie Diaries. Overall, DownTown Mystic has music sync-licensed on over 200 TV shows.

"The first thought that comes to my mind - this is AWESOME! " The Music Farmer

“Robert Allen’s vocals are a pleasure and the musicians behind him are always on point, flawlessly blending and highlighting.” OnStage Magazine