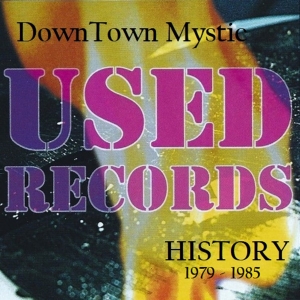 It's the 2nd album release for DownTown Mystic in 2020, which started with the critically acclaimed Better Day in January. That album has yielded 5 singles with consistent radio airplay on over 300 stations in 27 countries. The previously unreleased songs from the new album include original versions of some of the artist's best-known songs like Turn Around And Go and Modern Ways, the last single from Better Day. The idea for releasing an album of previously unreleased pre-DownTown Mystic material came from an unlikely source.

In 2017 DownTown Mystic Writer/Producer Robert Allen received a letter in the mail from renowned British rock journalist Nik Cohn, who had been living in Asbury Park, NJ doing research for a book on the late 70s-early 80s music scene there. He had come across a band called The Tupleos that had made an impression during that time hooking up with E Street Band bass player Garry Tallent. Cohn was able to trace the band back to Robert. It got Robert to go back into his musical archives, listening to tracks by The Tupelos, as well as the solo material he made after leaving the band.

Robert explains, "It was so strange to get that letter out of the blue, like someone tapping you on the shoulder to look at something. It wasn't until this pandemic stopped everything that I had the time to go back to that material and think about releasing it. With the Better Day release winding down it seemed like the right time".

"Familiar but fresh is the mantra here, as Robert Allen looks back at his past, in the same way everyone else does from time to time. The difference is, he has got plenty to show for it." JamSphere Magazine

3-Way Heartbreak is the stand-alone single released in advance of the DownTown Mystic: Used Records History 1979-1985 album that will be released on November 6, 2020. The 3-Way Heartbreak single also includes the track Same Old Lover, recorded in 1983. With its use of synths and drum machines, 3-Way Heartbreak fits in nicely with the current comeback of 80s music.

Stranger Things Music Supervisor Nora Felder loved the song and wanted to put it in the 2nd season of the show until she found out that the song wasn't a hit in the 80s because it hadn't been released.

"DownTown Mystic: Used Records History 1979-1985 is the collection resulting from Allen's stroll down his own Rock & Roll memory lane. The single sounds like the hit it should have been, had it ever been released back in the day." The Static Dive