Daniel Crabtree - Closer Than I've Ever Been 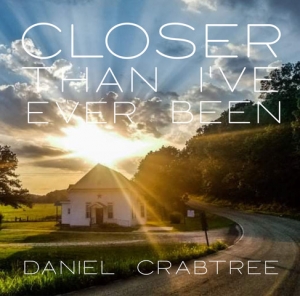 "Several passages in the Bible refer to living life as running a race, with the runner winning the prize at the end. We know that the prize is eternal life, and I'm nearer now to heaven than I've ever been."  - Daniel Crabtree

Closer Than I've Ever Been is Daniel Crabtree’s latest gospel project. It is his fifth album, consisting of 10 original songs written by Daniel. He has thus far released three singles from the project: "John the Baptist," "Closer Than I’ve Ever Been," and “Would You Be a Soldier,” which charted on the Bluegrass Today Gospel Charts as well as the Roots Music Report.

Daniel once again teamed up with award-winning singer/songwriter Donna Ulisse to coproduce Closer Than I've Ever Been. The tracks were recorded and engineered by the multi-talented Scott Vestal at his Digital Underground Recording Studio. A standout group of musicians brought the melodies to life, including Vestal on banjo, Cody Kilby on guitar, Gaven Largent on dobro, Patrick McAvinue and Jason Carter on fiddle, Harry Clark, and Jesse Brock on mandolin, and Evan Winsor and Mike Bub on acoustic bass.

In addition to releasing his own music, Daniel has had his material recorded by famous bluegrass artists such as Larry Sparks and Valerie Smith. Sparks' renditions of "Don't Take Your Eyes Off of Jesus" and "All Over Me" reached No. 1 on the Bluegrass Today chart.

Daniel launched his singer/songwriter career in 2016 with the release of his first album, The Gospel Road. His follow-up projects — 2017's In the Shadow of His Wings, 2019's The Storyteller in Me, and 2021's The Way I See It — have been a mixture of his two passions: gospel and bluegrass music.


OTHER DANIEL CRABTREE RELEASES
Closer Than I’ve Ever Been
http://www.AirPlayDirect.com/DanielCrabtreeCloserthanIveEverBeen

He Is Risen From the Dead
AirPlayDirect.com/HeisRisenFromtheDead

In The Shadow of His Wings
AirPlayDirect.com/danielcrabtree-intheshadowofhiswings

The Storyteller in Me
AirPlayDirect.com/danielcrabtree-thestorytellerinme

The Way I See It
AirPlayDirect.com/DanielCrabtreeTheWayISeeIt