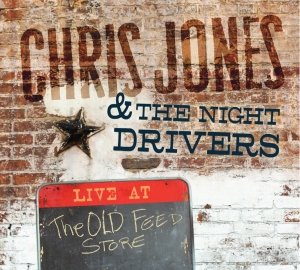 How do you follow an album that features three #1 and two #2 bluegrass radio hits? If you’re Chris Jones & The Night Drivers, you give fans what they’ve been asking for—a live album that delivers a few choice new selections nestled among a flock of favorites, recorded in an intimate, small-town venue that brings out the best in the quartet’s soulful vocals, hotshot picking and easygoing humor. From its blazing opener, “Bound To Ride, to its even speedier closer, “Pike County Breakdown,” Live At The Old Feed Store, which hits stores on October 7, is one that long-time fans will treasure, but it’s also a perfect introduction to a group heading toward its 20th anniversary in bluegrass.

Founded by guitarist Jones in 1995, the Night Drivers feature four distinct personalities who bring a multitude of talents to each performance. Indeed, the group boasts three radio personalities who appear regularly on SiriusXM’s Bluegrass Junction—Jones, banjo man Ned Luberecki and bassist Jon Weisberger—and Jones and Weisberger have won acclaim for both musical and industry achievements, with the former earning an IBMA Song of the Year trophy (“Fork In The Road”) and an IBMA Broadcaster of the year award, along with a 2014 nomination for IBMA Print Media Person of the Year. Weisberger’s collected the latter honor, and was the first recipient of the organization’s Songwriter of the Year award in 2012. Luberecki has also been nominated for the Broadcaster honor several times, and has earned additional recognition as a premiere educator, teaching at banjo camps around the world and recently releasing a popular beginning banjo instructional DVD, while mandolinist Mark Stoffel has built a strong reputation as a producer and recording engineer.

Still, it’s Night Driver music that’s front and center on the new release, exemplified by the first single, “The Battle Of The Bands,” which scored a world-exclusive premiere on Bluegrass Junction before dropping on September 23rd. Written by Weisberger, Thomm Jutz and Charley Stefl, the song was first recorded by Jones on The 1861 Project (2011), a collection of new original songs about the Civil War. Based on a true incident, it’s delivered with Jones’ typical warmth, and prominently features Stoffel’s delicate mandolin work. But the project displays the group’s wide range of inclinations, with nods to the Stanley Brothers (“Bound To Ride”), Johnny Horton (“I’m Ready If You’re Willin’”) and George Jones (“I Cried Myself Awake”), banjo pyrotechnics (Luberecki’s own “Emergency Pulloff” and a blistering “Pike County Breakdown”) and well-crafted originals (“Like A Hawk,” “Then I Close My Eyes,” “Lonely Town”).

Alongside these, the Night Drivers have laid in a selection of fan favorites, including Stoffel’s glistening take on The Sound Of Music’s ever-popular “Edelweiss” (followed by a lively turn on an old-time fiddle tune, “Forked Deer”), the gospel quartet of “Leaning On The Everlasting Arms,” and Luberecki’s comic tour de force, “Cabin Of Death,” one of the group’s most requested numbers.

A couple of guests make appearances—Sally Jones contributes harmonies to “Follow Your Heart,” and IBMA Momentum Vocalist of the Year Emily Bankester recaps her Lonely Comes Easy appearance on “Then I Close My Eyes”—but the focus here is all on the Night Drivers, who show conclusively that no studio magic is needed for them to deliver compelling performances. From start to finish, Live At The Old Feed Store delivers a faithful representation of a Chris Jones & The Night Drivers set, and as their busy schedule shows, that’s something that audiences are always eager to share.