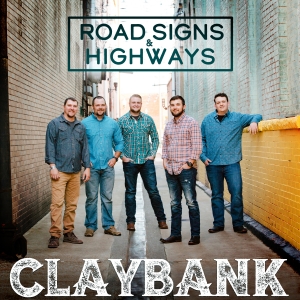 "Emma" is the first single released 5/21/2019 from ClayBank's 2019 album Road Signs And Highways on Mountain Fever Records. Today fans can feast their ears on the full album set to release 7/26/2019! We think you'll love it.

The tri-state area of the Blue Ridge Mountains has historically produced some of the very finest bluegrass musicians in the industry and ClayBank is a top-shelf example of that. The band takes their name from the community of Claybank (near West Jefferson, NC) that is not only where the founding band members originally met together to hone their craft but it’s a place that embodies the very spirit of the music that they play. With a nod to the traditional, hard-driving bluegrass and gospel music that has influenced them so greatly and adding their own dynamic energy and original material, ClayBank is ready to take the next step in their musical journey.

While this is the first band that Zack Arnold and Jacob Greer have been part of, new members Jason Davis, Kameron Keller and Jamie Harper bring a wealth of experience from being sidemen in some top bluegrass bands of the past several years. Jason, Kameron and Jamie have spent a lot of time together jamming and gigging in a number bands (Junior Sisk & Rambler’s Choice, Highland Travelers, and more) and remember first taking notice of Zack and Jacob when they hit the scene at the Galax Old Fiddlers’ Convention. Then, when ClayBank released their sophomore album No Escape (Mountain Fever Records) in 2018, they paid close attention to the younger members’ growth in songwriting, singing and playing - noting that they have the “whole package”. When the opportunity to partner with ClayBank presented itself the guys were eager to make the move not only to make music together but also to be part of something of their own and no longer sidemen.

The new configuration of ClayBank made their debut appearance on January 31, 2019 at the Society for the Preservation of Bluegrass Music of America (SPBGMA) convention in Nashville, TN and received rave reviews from those in attendance. Andrea Roberts (The Andrea Roberts Agency), the band’s booking agent/manager, was thrilled with the band’s first outing and said “this is a breakout band of 2019”! Andrea is proud to be working with the band and is anxious for everyone to hear them because “this is a group that will be carrying the mantle of bluegrass into the future”.