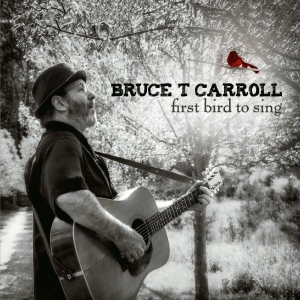 With the release of his third album, First Bird To Sing, Bruce T. Carroll is completing a significant musical hat trick. In the short span of only five years, Bruce has written, recorded, and released three albums: Ruckus and Romance (2016), Finding You (2018), and now, First Bird To Sing (Sept, 2021)! Throw in the 2020 release of his inspirational single Lift Your Head Up, and you have a body of quality work that would be the envy of any working songwriter!
First Bird To Sing is distinctive in many ways, recorded live as it was by real musicians (Bruce T Carroll, Connor Kennedy, Lee Falco, Brandon Morrison, Will Bryant, Andy Stack, Marc Shulman, Sara Milonovich, Jay Collins, and others) in a real studio (The Building in Marlboro, NY), and in real time (with very little remote tracking). Not an easy feat during a pandemic, but EVERY precaution was taken to ensure the health and safety of the friends and musicians working in the same room at the same time, and, though it took longer than it should have, everyone involved emerged in good health!
First Bird To Sing is also distinctive in that it is a unique compilation of raucous rockers alongside reflective ballads, with some virtuoso musical performances alongside poignant and very powerful lyrics. And, although the album was conceived and largely written during a tumultuous political year, Bruce wisely strikes a good balance between the personal and the political shadings that usually inhabit his work.
Three albums and one single in five years! Such prolific output is an indication that Bruce is trying to make up for lost time, and indeed he is. He spent fourteen years (1999-2013) operating a legendary Larchmont, NY music venue called the Watercolor Café, where he presented regional and national acts of great renown, as well as new and undiscovered acts that soon broke upon the national scene. While presenting great music in a beautiful club setting was a labor of love for Bruce, it often kept him from pursuing his first love and overriding passion: lyric songwriting. Since closing the Watercolor in early 2014 Bruce has had the time and headspace to plunge back into songwriting and performing, which had been on hold since his early days playing in the heady NYC music scene of the ‘70’s and ‘80’s.
With the release of his first official album Ruckus and Romance, in 2016, which was hailed by No Depression Magazine as "devilishly brilliant" and "intensely beautiful", Bruce T Carroll established himself as an Americana artist with a social conscience and deft lyrical touch. Using irony and imagery as tools in trade, and a band of great musicians to back him up (Clifford Carter, David Spinozza, Marc Shulman, Sara Milonovich, Tracy Grammer, Nicole Alifante, Porter Carroll, Lincoln Schleifer, and Joe Bonadio) Bruce made Ruckus and Romance a distinctive debut, and his song When Two Worlds Collide helped bring the worldwide refugee crisis into sharp focus. Ruckus and Romance garnered significant airplay worldwide, described by WFUV as "an accomplished album, attuned to the zeitgeist of the moment".

Bruce followed up less than two years later with the release of the six-song EP Finding You. The album is a sort of lyrical tone poem, with the theme of finding, or regaining, something that had been missing, or lost. What had been lost at that time, it seemed, was the very soul of the nation, mired as it was in the throes of right-wing governance that sought to undo a century of progressive gains. The signature song on the record, Fox in the Henhouse may still be Bruce's definitive statement on what was then the state of the union. Another song on the record, I Will Never Leave, is an anthemic statement of the intention to resist and, ultimately, to remain. Produced by Andy Stack, Finding You features stellar performances by Stack (guitars, bass, keyboards), Sara Milonovich (violin), Lee Falco (drums), Jeremy Baum (organ, accordian) Brandon Morrison (bass), and Adrien Reju and Melissa Ahern (vocals)...
.
In March 2020, Bruce released a powerful new song and video entitled Lift Your Head Up. It was, in essence, a call for people of conscience to get involved in the social and political battles raging around them, and effect necessary change. It was a call to activism and It remains a work that represents much that Bruce has sought, through artful songcraft and powerful music, to convey to the world.