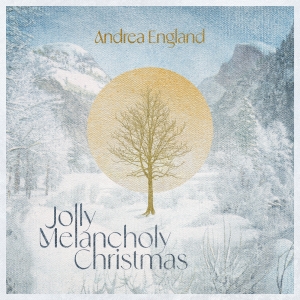 For Andrea, it’s all about storytelling, and – one way or another – getting to the truth of things. She likes to keep it real.
“Jolly Melancholy Christmas” is Andrea’s first Christmas release, co-written by Andrea and two longtime friends, collaborators, and hit-makers, Liz Rodrigues and James Bryan (who also produced). It’s been a minute since Andrea’s released new music of her own: her last solo album, Hope and Other Sins, was produced by Grammy Award winning producer/guitarist Colin Linden, and spent several weeks on Cashbox Magazine’s Top 50 Folk chart and hit #1 on Galaxy’s Folk Roots Radio. Her previous release, Lemonade, spawned numerous network TV placements and international songwriting awards (John Lennon, International and USA Songwriting Contests), kickstarting her career as a songwriter.

Andrea has a unique ability to work successfully in multiple worlds, from recording and performing as a solo artist herself in a folk/roots/country vein, to placing pop co-writes with pop artists like former Pussycat Doll Nicole Scherzinger (for which she received a UK Gold album award), Broadway star, Tara Macri, and country songs with Canada’s Canadian Country Artists such as Meghan Patrick, Don Amero, Twin Kennedy and more.

She’s also an advocate for songwriters, sitting on the Board of the Songwriters Association of Canada, and founder/host/curator of Toronto’s most popular, and well-respected, songwriter series, Four Chords & the Truth.
8
What's This
Advertisement