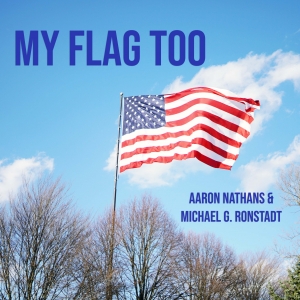 Aaron Nathans & Michael G. Ronstadt present “My Flag Too,” a mid-tempo reflection on how the American flag belongs to everyone. It tells the story of a first-generation American whose father fought in World War II, and how democracy becomes their inheritance. Amid an era where a few loudly try to co-opt the flag to their political cause, this song celebrates how the flag is a reflection of this nation’s diversity. Watch for the video, to be released on April 30 ON NEW FOLK INITIATIVE.

Cello-based songwriters are rare, and the alt-folk duo of Aaron Nathans & Michael G. Ronstadt take advantage of Ronstadt’s adventurous and wildly creative technique to face our shared disaster, head-on.
As an acoustic duo, the two create a compelling musical palate. Ronstadt’s cello lines are reminiscent of the live-layered magic of Zoe Keating, and his songwriting reflects the creative diversity of Paul Simon. He weaves intricate patterns around Aaron Nathans’ baritone voice, studied folk meters and dash of irony in the tradition of David Wilcox and Dar Williams. As multi-instrumentalists, the two play a total of 33 distinct instruments between them.
Michael G. Ronstadt, nephew of Queen of Rock Linda Ronstadt and a member of a family with a rich musical heritage, holds a master’s degree in cello performance from the University of Cincinnati College-Conservatory of Music. Aaron Nathans is an award-winning songwriter and a leader in Philadelphia’s community of songwriters.