Amanda Cook - Point of No Return 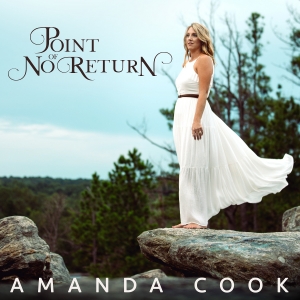 
WILLIS, VA - Mountain Fever Records is delighted to bring bluegrass fans the newest album from Amanda Cook, Point of No Return. The album and its title track represent where Amanda is in her career. She’s come too far and loves it too much, there’s no turning back – she’s at the Point Of No Return.

Written by Sierra Hull, Andrea Zonn, and Thomm Jutz it follows the theme of being torn between music and a husband and the real life struggles when you have to make that decision at some point... Can you settle for a life just being "good enough" when you know more?

Amanda Cook from the Gulf Coast of Florida came onto the Bluegrass Scene with drive and determination. Bringing a mix of Traditional and Contemporary Bluegrass in every show, audiences of all ages enjoy her live performances. The Amanda Cook Band can be found playing many shows regionally and they are moving into the national level at a fast pace.

Jay, Florida's Amanda Cook acquired a love of bluegrass from her father who played banjo throughout her childhood. In early 2007, Amanda formed bluegrass group High Cotton with her father and received her first taste of performing, fueling a fire to continue on a professional level. In 2013, determined to create her own sound, Amanda stepped out on her own and released her first solo album One Stop Along the Road. The project made it to the top 150 Roots Music Bluegrass Album Charts for 2014 and 2015 (#61 for 2015 #56 for 2014). The self-released album also brought Amanda significant regional attention and furthered the desire to grow her brand, resulting in the addition of a full touring band. In early 2017, Amanda signed with Mountain Fever Records and recorded her debut album on the label "Deep Water." Amanda was excited for her 2nd album project, especially that she and band member Carolyne VanLierop co-wrote the title track Amanda has created quite a loyal fan-base through her palpable delivery of a soul-wrenching song. And her light-hearted, down-to-earth style helps her create an undeniably strong connection with her audience.

• Point Of No Return is Amanda’s third album. Her second with Mountain Fever Records.

• The first two singles from this project received significant chart action and radio play. They are "You Were Mine" and "Good Enough (Ain't Good Enough)."

• The project was recorded at Mountain Fever Studios in Willis, VA.

• It was produced by Amanda Cook & Aaron Ramsey.

• It was mixed and mastered by Aaron Ramsey.

• After the huge success of her last album, Deep Water, Amanda signed an impressive 7 record deal with Mountain Fever Records.

• When she’s not on the road, Amanda enjoys producing music at Mountain Fever Studios and spending time with her family.