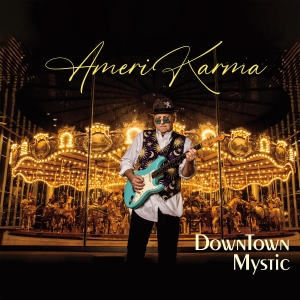 Live is the 3rd single to be released from the upcoming AmeriKarma album. It follows the singles Superstar and Fly, which garnered airplay on over 150 stations in 25 countries, including 30+ AAA/Non-com stations in the US. The Live single contains 2 tracks and features Steve Holley (Paul McCartney, Elton John) on drums & harmony vocals with urban legend Paul Page (Ian Hunter, Dion) on bass and harmonica wizard Jerry Fierro adding some flavor to the funky track. The track was mastered by mastering legend Leon Zervos at Studios 301 in Australia.

"DownTown Mystic is the real deal. It's hard to overstate this." JamSphere Magazine

"If names like The Rolling Stones, Tom Petty, Buffalo Springfield and Bruce Springsteen have occupied any significant time in your life, well, DownTown Mystic most certainly should be on regular rotation, too." Take Effect Reviews.com

"DownTown Mystic is at the dawn of a new era in his career." The Static Dive

The sound of DownTown Mystic is “vintage yet modern”. The music is rooted in all the great traditions of American Rock‘n’Roll, blending storytelling songs with vintage guitars and analog recording into a unique style that owes nods to Buffalo Springfield, The Byrds, The Beatles and Rolling Stones but somehow manages to sound as contemporary as anything currently available.

DownTown Mystic is the alter ego of American Rocker, Robert Allen, whose passion for “old school” recording borders on obsession. Robert adds, “I grew up listening to all these great records and their sound and style has stayed with me”.

Robert is joined by a stellar cast of musicians, including drummer extraordinaire Steve Holley (Paul McCartney/Wings/Elton John/Ian Hunter) & urban legend Paul Page (Dion/Ian Hunter) on bass, as well as one of the great rhythm sections in the history of American Rock'n'Roll--Max Weinberg & Garry Tallent of Bruce Springsteen’s E Street Band.

2018 saw DownTown Mystic sign Licensing and Publishing Deals in Europe with BMP Broken Music Publishing in the UK and the release of the Rock'n'Roll Romantic album via Believe Digital. This lead to signing a Licensing Deal with UK Label Last Man Music to release the new Better Day album worldwide ex N. America at the start of 2020.

In 2017 the On E Street EP featuring Max Weinberg and Garry Tallent was released via ADA/Warner Music in Europe, with the single Way To Know reaching the Top 20 on the European Indie Top 200 Chart. DownTown Mystic’s 1st release, Standing Still, found critical acclaim overseas in 2011. That album made the Top 25 Euro/Americana Chart, which led to a Licensing Deal in Europe distributed by Sony Music.

Radio has played an important role in the career of DownTown Mystic. It started with veteran tastemaker, Jed The Fish, playing a DownTown Mystic track as his Catch Of The Day on “World Famous” KROQ in LA, one of the most influential stations in the US. This would be followed by the “Mayor of The Sunset Strip”, legendary KROQ DJ Rodney Bingenheimer, playing another track and leading to national airplay.

In 2016 DownTown Mystic released DownTown Nashville and Rock'n'Roll Romantic, the 1st full album since the self-titled DownTown Mystic in 2013. That album spent 10 months on the US Americana Radio Charts, with a #1 single and #3 album on the Roots Music Report Charts. DownTown Nashville, released in the spring, debuted on the Top 5 Most Added on the AMA Radio Chart and became DownTown’s most successful release at Americana Radio. Rock'n'Roll Romantic, released in the fall, would go on to be DownTown Mystic’s most successful US release garnering airplay on over 80 radio stations across 3 formats.

Besides gaining recognition from Radio programmers, the DownTown Mystic Brand has been developing via Sync Licensing with music placed in movies and on over 230 TV shows, including The Voice on NBC, American Pickers on the History Channel, as well as shows on MTV, USA, CNN, Discovery, National Geographic, TLC, WE TV, GACTV and Destination America. Many of these shows are also broadcast internationally, helping to spread the music of DownTown Mystic around the world.