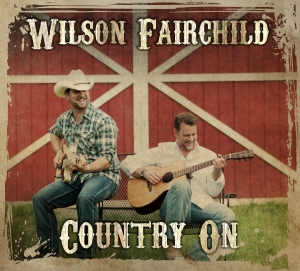 Wilson Fairchild is a country music duo made up of Wil and Langdon Reid from the beautiful Shenandoah Valley of Virginia. These two men, referred to as “the Reid boys,” have been writing, performing and playing music together their whole lives. To sum up their passion and drive for their music and career, a self-penned line from their new title cut, “Country On”, says it all: “We love country music and we’ll never let it die.”

Wil and Langdon are highly acclaimed songwriters. They both have been writing songs since their teenage years in between baseball and football games and girls, of course. Along with recording their own music, such artists as the Statler Brothers, Ricky Skaggs and Dailey & Vincent have recorded their songs, as well. So yes, that means their songwriting gamut spans through the country, bluegrass and gospel fields. They learned the craft from the best and are no strangers to knowing how to put an idea to music and come away with a great storytelling song. In fact, Wil and Langdon have written five of the new cuts on their latest Country On album, and included a riveting version of the “The Star Spangled Banner.”

Along with singing and songwriting, they both play guitars on stage and have played many other instruments during recording sessions. But a Wilson Fairchild show is much more than music; it is an experience. It is professional. It is exciting. Their clever lyrics will make you smile and they know how to strike your heartstring with a perfectly delivered ballad. One thing’s for sure: these guys know how to entertain.

They get their “entertainment chops” honestly. Wil’s dad is Harold Reid and Langdon’s dad is Don Reid of the legendary Statler Brothers. In 2007, Wil and Langdon wrote a tribute to the Statlers simply called ‘The Statler Brothers Song.” They were asked to be a part of the medallion ceremonies and to perform the song for all of their “Statler dads” when the Brothers were inducted into the Gospel Music Hall of Fame and the Country Music Hall of Fame.

From the last few years to the present, Wil and Langdon keep adding successes to their resume, as well as friends and fans to their Facebook page. Their engaging personalities coupled with their musical talent and impromptu wit is a perfect match for any audience. They have opened the show for the one and only George Jones on several concert appearances. They have graced the stage of the Grand Ole Opry. This year, 2012, Wilson Fairchild was featured on Larry’s Country Diner on RFD-TV. They were also part of a DVD series call Country’s Family Reunion: Second Generations, which is also being aired on RFD-TV. On the Generations show, the guys performed one of their favorite Statler songs their dads wrote, along with their tribute to the Statlers, ‘The Statler Brothers Song.” They recently won a contest at the Greenbrier Resort in White Sulphur Springs, West Virginia. They sang “The National Anthem” before Toby Keith took the stage on July 4th, 2012 at the PGA Classic and will perform several times in 2012 at the resort. Wilson Fairchild also sang “The National Anthem” at Camden Yards in Baltimore, Maryland before the Orioles game in July of 2012. They continue to add shows and appearances daily to their calendar.

“Country On” is the latest album release. Two of the songs, “Dude’” and “Stuck” were co-written with their “musical brother”, Bryan Kennedy. You might have heard of Bryan’s successes from three number one hits he penned for Garth Brooks. The CD, Country On, was produced by their other Kennedy brother, Gordon. Gordon Kennedy is a Grammy winning producer for his work with Peter Frampton as well as a killer guitarist and a hugely successful songwriter. Gordon was one of three writers on the Eric Clapton hit, “Change the World.” Wil and Langdon teamed up with Gordon to write “Make God First” for Ricky Skaggs, which is on his Grammy nominated album Mosaic.

Wilson Fairchild performs all over, acoustically or with full production shows with their band. Once you hear their music, you are a fan. Once you see them in concert, you are a bigger fan. And once you get the chance to meet them, you are a friend for life.