Whitstein Brothers - Rose of My Heart 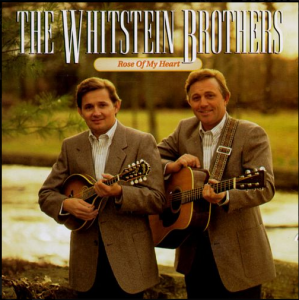 The classic harmonies of the Whitstein Brothers evoked the brother duets that flourished in country music from the 1930s through the 1950s, especially resembling those of the Louvin Brothers. Robert and Charles Whitstein were born one year apart in Pineville, LA, to farmer R.C. Whitstein, who sang and played guitar on his own radio show in nearby Alexandria. The brothers grew up with seven other siblings, and their first exposure to harmony singing came from hearing their parents sing gospel music on Sundays. They learned music early, and before reaching their teens they had appeared on the television show Country Time and won local talent shows. They made their first recordings in their early teens; their debut single, "Louisiana Woman," became a local hit in 1962. Its success inspired the brothers to head for Nashville, where they billed themselves as the Whitt Brothers and toured with Faron Young, Porter Wagoner, and Little Jimmy Dickens. Both Whitsteins were drafted in the early '60s, and Robert served in Vietnam.

In 1969, after being discharged from the military, they returned home and recorded The Whitstein Brothers Sing Gospel Songs of the Louvin Brothers (their name was spelled "Whitstine" on the original release, but was corrected when Rounder released the album on CD in the 1990s). The album, a neglected classic in the brother-duet tradition, gained little attention, but the brothers continued to perform around Louisiana while working at other jobs; Robert Whitstein was a lumber contractor. Finally, in 1980, one of their concerts caught the ear of longtime Louisiana songwriter and talent spotter Tillman Franks, who had shepherded the career of Johnny Horton, among others. Dazzled by their virtuoso harmonies, Franks encouraged the brothers to move to Nashville.

Rose of My Heart Their pure duet sound, with mandolin and guitar in the foreground, made quite a splash among lovers of traditional country music, but it took them several years to land a recording contract -- and when they did, it was with Massachusetts-based Rounder Records. Their 1984 debut for the label, Rose of My Heart, paid tribute to their forebears in the brother-duet tradition, mixing classic songs like "Kentucky" with original compositions in the same style and featuring top bluegrass players as sidemen. The Whitstein Brothers followed up Rose of My Heart with 1989's Grammy-nominated Old Time Duets. The brothers split up in the early '90s, and Charles Whitstein teamed up with Charlie Louvin in 1992 to record Charlie Louvin and Charles Whitstein: Hoping That You're Hoping, followed a year later by a live album recorded in Holland. In 1994, the Whitstein Brothers reunited and resumed recording together. They returned to Rounder for the 1996 album Sweet Harmony, which compromised their traditional sound not a bit even as its song selection included contemporary material such as Paul Simon's "The Sound of Silence." The brothers became major festival attractions and toured internationally, but their partnership was severed by Robert Whitstein's death on November 14, 2001.
7
What's This
Advertisement