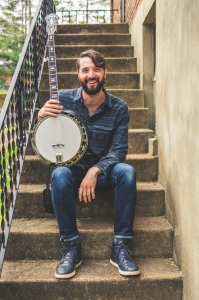 There has never been a shortage of prodigious musicians in bluegrass music, especially on it’s signature instrument, the 5-string banjo. Less common are virtuosic players with deep and diverse musical backgrounds that inform their approach to bluegrass. Though the numbers of musically omnivorous bluegrass musicians are on the rise, few have the staggeringly broad musical base of banjo player, composer, and producer, Wes Corbett. Wes’s skills as a player have kept him on the forefront of acoustic music since he first picked up the banjo as a teenager in the pacific northwest. He would go on to be a key player in Boston’s vibrant music scene, an instructor at the prestigious Berklee College of Music, and today is a rising star in Nashville’s elite bluegrass scene. Wherever Wes has appeared, he has been on the cutting edge, especially in his current gig as the newest member of the Sam Bush Band. Fellow players have long been familiar with the precision, refinement, and sparkling musicality, that have kept him so busy as a player and producer. The release of Cascade, his first solo album, finds him stepping forward as an artist in his own right, and audiences are sure to catch up with what Wes’s peers have known for years.

Wes refers to Cascade as “…a cumulative work, one that I’ve been writing for 10 years.” Cascade does indeed feature a decade’s worth of his original music, carefully selected and arranged for this project and the players involved. The great care with which Wes approaches his work is evident in every moment of the album, and each track stands on it’s own. One of the stated goals for Cascade was to show that instrumental music can be as captivating as music with words, and that it can have at least as much emotional impact. With this in mind, it comes as no surprise that each new track shines bright, and is as compelling as the last.

When it came time to bring Cascade to life, Wes and producer Chris Eldridge, best known as a Punch Brother and a member of the Live From Here house band, knew exactly who would play on the album, and carved out time over 5 months to carefully refine and arrange the selected tunes with these specific players in mind. The musicians Wes and Chris brought together would make anyone’s annual awards ballot: Sierra Hull and Casey Campbell shared mandolin duties, Chris and fellow Punch Brother Paul Kowert played guitar and bass respectively, improvisation master Alex Hargreaves held the fiddle chair, and Simon Chrisman, Wes’s oldest muscle partner, joined for 3 tracks on hammered dulcimer. To call the band stratospheric would be an understatement. Tracking took place with master engineer Ben Surrat behind the mixing board at his Rec Room studio, and Cascade was mixed by acoustic audio wizard Dave Sinko, then mastered by legendary engineer, Gavin Lurssen.

From the age of 2 1/2, Wes was destined for a life in music. His grandfather, a conductor and professor of music, recognized early musical ability in his grandson, and encouraged Wes’s parents to start his studies. He studied classical piano, and later Malian percussion, and Kora, an ancestor of the banjo. What was to have been a career as a classical piano soloist took a turn when a 14-year old Wes first heard Béla Fleck’s landmark album Doubletime. At that moment he knew that he wanted to play the banjo. It was around the same time that he met Simon Chrisman, a fellow young musician, a hammer dulcimer player, who also lived on Bainbridge Island, just west of Seattle across the Puget Sound. The two budding virtuosos would become one another’s primary musical partners for the next several years, playing together for long hours every day. Over time the pair would develop a common musical vocabulary, shaped in part by the striking sonic similarities of their respective instruments.

When the time came for university studies, Wes chose to attend the legendary music program at Cal Arts, where he stayed for only 1 year. At his first visit to the annual International Bluegrass Music Association conference, Wes met guitarist Chris Eldridge and banjo player Chris Pandolfi, now of The Punch Brothers and The Infamous Stringdusters, respectively. Chris Pandolfi was preparing to make a move from Boston to Nashville, and offered to make introductions if Wes were to move to the northeast. Wes took him up on the offer and spent the next 9 years playing a central role in Boston’s storied acoustic and bluegrass music scenes, acting as Banjo Professor and grant manager at the illustrious Berklee College of Music, and touring and recording as part of cutting-edge crossover band Joy Kills Sorrow, among many others.

After those 9 successful years in Boston, Wes and his now wife relocated to Nashville; a logical move for a banjo picker. In little time he was playing in rising americana star Molly Tuttle’s band, and making the rounds in the bluegrass world for the first time in earnest. Wes, who as a student had started with Bèla Fleck and worked back to Earl Scruggs, the player most credited as having originated the modern 3-finger style, had worked his way back to the world of traditional bluegrass for the first time.

Wes’s reputation as a musician of careful thought and vision grew, and shortly after moving to Nashville he took on his first full project as credited producer. At the helm for string band innovators Front Country, Wes brought their second full-length album, Other Love Songs, to life. Not long after, he returned to the producer’s chair to work on Fiddler’s Pastime by Mile Twelve member Bronwyn Keith-Hynes. Wes co-produced Cascade alongside Chris Eldridge, and is sure to be back in the driver’s seat for more exciting albums in the years to come.

Wes’s ability, taste, and professionalism have not gone unnoticed in the highest echelons of bluegrass music. Recently Wes became the newest member of the Sam Bush Band, and joins an all-star lineup of Nashville aces, supporting the father of newgrass. He’s just getting started in Music City and has already made himself a picker to watch.