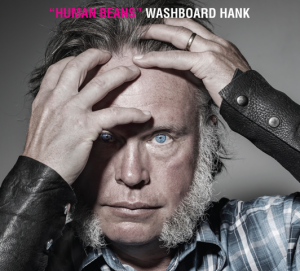 Washboard Hank is a sonic adventurer, a man who knows there's rhythms inside things some folk would call junk and infinite melodic possibilities in the nearest plumbing supply store. But while John Cage and Brian Eno and other musical explorers were drawn to the art galleries and concert halls, Hank's musical path led straight to the street.

Hank grew up working on his grandfather's farm near Peterborough, Ontario, but in his heart he knew he was born to roam and roam he has ever since. It started when his buddy Reverend Ken took a liking to Hank's music and set some to music. He found a washboard and was reborn as Washboard Hank, one of Reverend Ken's Lost Followers and together they played hundreds of street corners and bars. Next came four years of touring as a Flying Squirrel, playing 200+ shows a year all over North America with Fred Eaglesmith.

You can hear his years of playing in the streets and honky tonks in both his songs and his performances. He's very observant and clearly deeply cares about the world we live in, but he brings it to you with a smile and with performances that are energetic, funny and spontaneous.

In addition to the banjo, Martin guitar, kazoo, and dobro, he plays the washboard (duh) and a truly amazing conglomeration of bells, license plates, duck calls, and the Fallopian tuba. When he steps on stage, you may hear "I've Just Seen the Rock of Ages" or "Elvis isn't dead (He's Living Down in Tweed)" or maybe even " The Soundcheck Song".

To call Washboard Hank a legend kinds implies he's been there and done that but really that is not true. He is still doing it and currently is at the top of his game. His live shows are indeed legendary because they hit home on so many emotional levels (think Johnny Cash meets Stomping' Tom meets Spike Jonz} that it is impossible not to be moved by the man's ability to communicate and entertain his audience while delivering some powerful messages, often hilariously, and in some cases stinging indictments of what we as a species are doing to our planet.

"Hank you are a throw back"
- Commander Cody

"I always tell people that Washboard Hank taught me everything I know about show business. He came on tour with us years ago. I thought he was awesome. He’s an institution."
- Corb Lund

“My face hurts from laughing”
- Many other people!
12
What's This
Advertisement