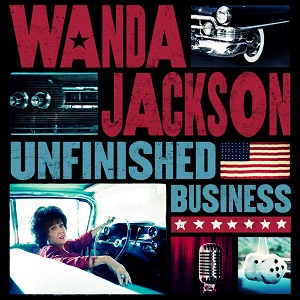 There were a lot of great female singers when I was growing up (you can’t call them all women, because Brenda Lee was just 15 when she had a rockabilly hit with “Sweet Nothin’s”), and I fell in love with most of them, from Connie Francis, who always had a sob in her voice, to Patsy Cline, who sang songs like “Crazy” with such sweet regret that you wanted to put your arms around her and tell her, “Shh, now, shh, baby, it’ll all be okay.” But there was never a singer quite like Wanda Jackson, one who could hold her own with rockabilly rebels like Gene Vincent and Jerry Lee Lewis any day of the week. She often wore a big white cowboy hat that made her look country, but when she opened her mouth and started to wail, you understood that chick had funk.

Now in her mid-70s, you’d think the one-time First Lady of Rockabilly would be either retired, or running on fumes. You’d be wrong on both counts. The lady is still performing, and…did I say something about running on fumes? Make that running on hi-test, as this album proves. A full tank. Wanda Jackson still has plenty of unfinished business, and big props go to Justin Townes Earle, who has given the set a stripped-down honky-tonk feel that’s by turns cheerfully explosive and melancholy.

What most delighted me about Unfinished Business is how it ignores genre boundaries, hitting all the Wanda Jackson sweet spots: rockabilly, country, pop, even gospel (“Two Hands,” a heart-lifting beauty written by the late Townes Van Zandt). Her rendition of “California Stars,” a Woody Guthrie-Jeff Tweedy collaboration I first heard on the album Mermaid Avenue, is sweet and unaffected, and her take on “Am I Even a Memory” (with a guest vocal from producer Earle) is an album standout, a classic country tune that ranks with the best of Tammy Wynette and Loretta Lynn: it makes you ache, brothers and sisters, and that’s just what it’s supposed to do. Why do you think the pedal steel always sounds like tears?
Then there are the classic chin-out tunes like “Push Over” and “Tore Down,” that recall Jackson classics like “Let’s Have a Party” and “Hot Dog! That Made Him Mad.” Jackson’s R&B side is on display in “It’s All Over Now”—maybe not quite the equal of the Bobby Womack version back in the day (I’m prejudiced, I admit it), but it shuts down the better-known Rolling Stones version. And I mean cold.

In the end, there’s not a thing a guy like me can say about music that’s as good as listening to the music. When it’s right, when it’s really in the groove, it’s like a bar of bright sunlight shafting into a previously dark room. Here is a one-of-a-kind voice as fresh now as it was in 1958. This album made me smile, chased out a tear or two, and occasionally brought on the goosebumps. A voice this big will never be living in the past. Wanda Jackson really does have a lot of unfinished business.