Vern Gosdin - 40 Years Of The Voice 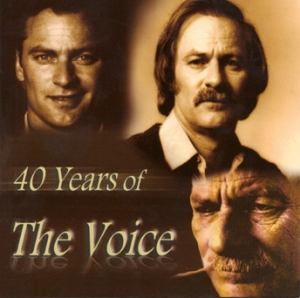 As the sixth child in a family of nine, Vern Gosdin began singing in a church in Woodland, Al. where his mother played piano.

In 1961 he moved to California where he joined the West Coast Country music movement, first as a member of the Golden State Boys, then the Hillmen before forming The Gosdin Brothers with brother Rex. The duo hit the charts in the late 60s with Hangin' On on the Bakersfield International label, then with "Till The End" on Capitol Records.

He moved to Atlanta during the 70s, retired from performing and operated a glass company, but before the end of the decade he was back in the studio recording with Emmylou Harris and Janie Fricke thanks to the helping hand of his good friend George Jones.

He signed with Compleat Records in the early 80s, and in 1984 released "There Is A Season", picked by the Los Angeles Times as "Best Country Album" of that year.

He made the Top Ten consistently in the early '80s, really hitting his stride when he teamed with Max D. Barnes as a songwriting collaborator. The pair specialized in songs of cheating and barroom romance, often delivering an over-the-top emotionalism that got Gosdin compared to the ultimate legend of honky tonk vocals of George Jones.

In 1983, Gosdin had two Top Five hits — If You're Gonna Do Me Wrong (Do It Right) and Way Down Deep and was voted CMA's Artist of the Year. The following year he had his first number one single with I Can Tell By The Way You Dance (You're Gonna Love Me Tonight) and had two additional Top Ten hits.

After Compleat Records went bankrupt, Gosdin signed with Columbia in 1987. He had success right off the bat with Do You Believe Me No. He hit number one once again with the perennially popular Ernest Tubb tribute Set 'Em Up Joe. Gosdin's Chiseled in Stone , co-written with Barnes, won the Country Music Association's Song of the Year award in 1989.

His 1989 album Alone was a rarity: a concept album in a traditional country style. It chronicled the dissolution of Gosdin's marriage. Recently Is It Raining At Your House written by Gosdin was re-recorded and released by Brad Paisley.

During his 40 year career he achieved a total of 3 #1's(Setem Up Joe, I can tell by the way you dance, and I'm still crazy) 23 top 10's and 41 singles. In 1998 his publishing company Hookit Music was inducted into the Music Publishers Hall of Fame, 2005 brought his induction into the Alabama Hall of Fame for best album "Back in the swing of things" and a Lifetime Achievement award from the Alabama Country and Gospel Music Association.

Vern continued writing and singing up until 2008 despite his battle and recovery from his first stroke in 1998, he finished another album "40 Years of the Voice" releasing 10 new songs, 14 songs from his 1968 album "Sounds of Goodbye" with brother Rex Gosdin, and 77 of his favorite classics. In an effort for Gosdin to give back to his fans and his country, "Voice for Relief" was born. A new non-profit organization aimed at assisting victims to tragic storms. "Voice for Relief" is continuing its efforts to aid those in need, in honor of Vern Gosdin.

On April 28, 2009, Wings of faith delivered him safely to Heaven's gate as he lost the battle to another stroke. His legacy of songs will forever remind us of the powerful songwriter and heart wrenching vocals known affectionately as "The Voice of Country Music".

Despite a strong association with the Byrds , the Gosdin Brothers' progressive blend of bluegrass and country-rock never found its way to a popular audience, though Vern Gosdin would later become one of country's more acclaimed vocalists. Vern and Rex Gosdin grew up on a farm in Woodland, AL -- two of nine children -- and started singing together after discovering the Louvin Brothers . They performed regularly on local radio as teenagers, and moved to the Los Angeles area in 1961, where they joined a bluegrass group called the Golden State Boys.

Chris Hillman was a member prior to joining the Byrds, and the group later changed its name to the Hillmen. When Hillman departed, the Gosdin Brothers teamed up to form their own outfit, and sometimes served as the Byrds' opening act.

Their first and only album, Sounds of Goodbye, was released in 1968, and its brand of country owed much to the Byrds' influence.

The Gosdins opened for Merle Haggard on tour, and the Byrds recorded Vern's Someone to Turn To for the soundtrack of Easy Rider in 1969, but the overall lack of exposure proved too frustrating, and the brothers disbanded in 1970. Vern moved to Atlanta and ran a glass business before returning to music in 1976; this time the charts were kinder, and he ran off a string of country hits that lasted into the early '90s, when health problems curtailed his performing activities.Rex, too, mounted a solo career, but was less successful, and passed away in 1983. ~ Steve Huey, All Music Guide.