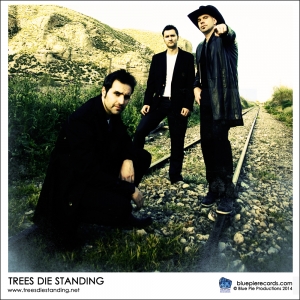 Trees Die Standing announce the release of their new album out now on ConcertHouse Music through Blue Pie Records for the world. Trees Die Standing is the new musical project of Jack Garcia, Mario Garcia, and Javier Martin, from Spain. These guys have been in the music business all their lives, cutting their musical teeth with nonstop touring when they were younger and all having this experience culminate to major shows and playing to stadiums throughout Spain.

As solo artists and working in other bands they have played to audiences of 20 people and stadium shows with 30,000 + screaming adoring fans all hanging on every note and song that was played. They have achieved multiple gold discs in their own right and now bring us their new album “Forest”, a collaboration by some of Spain’s demigods of rock.

Jack, Mario and Javier have music running through their veins. With passion and the need to creatively express this new chapter of their lives they formed “Trees Die Standing” back in 2011.

Think in terms of bands like Muse, Foo Fighters, 30 Seconds to Mars, and The Killers and put this into a musical blender and then bury this in the ground. Add some water and then ….wait ….watch……and there you have your “Trees Die Standing” emerging to take over the Euro Rock worlds.

They released their debut album “Update the World” on ConcertHouse Records back in 2012 to critical acclaim in their home country Spain. As Jack says: “This album was a social comment on state of world through their eyes and ears. The mantra from this album was: People it´s time to update the way the world works”.

The band from the very start was always able to draw crowds to their shows a result of their former past lives in major rock bands. Filling stadiums is now where the band have their sights fixed.

This new album “Forest”, is the evolution of the musical tree that has now been watered by their adoring fans. The musical forest is growing and spreading its branches through songs like Nobody’s Perfect, Broken Toy, or the first single, Break Me In Case Of Fire. The fans and radio in Spain have been letting the band know that they know that they are on the right pathway by already making some of the songs standards on leading rock stations.

The songs take the listener on a journey, back to the days when the album format meant something and a band debated for days on the track order for their releases. This is classic rock in its pure sense. This is Trees Die Standing growing a musical forest in your ears. Listen once and it will be hard not to have flashbacks two days later, wondering what that song or songs were you have sitting in your ear and you have been humming all day.

This is not musical ear worms for your brain, this is a forest that germinates and then blocks out everything else till you constantly reach for this album to be part of your musical staple diet in your life. Think back to when Super Tramp gave us “Breakfast in America”. That album was being played across the globe and it all started with a bunch of guys in a studio making the music that would go on to become one of the world’s biggest selling albums.

The vocals are there with Forest and the sound is now but yet takes elements of respect from greats like Super Tramp, The Foo Fighters and brings them into a Spanish villa that you have rented for that party weekend. It’s the villa that you have escaped to for a long weekend of nonstop ROCK and ROLL parties with those Spanish ladies that steal your heart.

This is pure rock, this is Spain bringing back to the world an echo chamber of some blended rock made into what can only be “Trees Die Standings” first classic album.