Tracy Lawrence - All Wrapped Up In Christmas 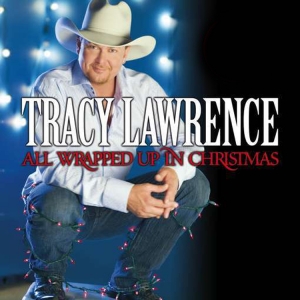 Tracy Lawrence’s respect for country-music tradition has made him one of his genre’s cornerstone stylists. The Arkansas native burst on the scene with 1991’s Platinum-selling Sticks and Stones. The album contained four massive radio hits, including its title tune. Alibis, issued in 1993, sold more than two million copies and spawned four consecutive No. 1 hits, “Alibis,” “Can’t Break it to My Heart,” “My Second Home” and “If the Good Die Young.”
“Can’t Break it to My Heart” and “My Second Home” were the first hits that he co-wrote. Lawrence also had a hand in penning “If the World Had a Front Porch” (1995), “Stars Over Texas” (1996), “How a Cowgirl Says Goodbye” (1997) and “Lessons Learned” (2000).
“Back then, I had a lot of confidence issues about my songwriting,” he reflects. “I got placed with tremendously talented co-writers. Working with them, I realized how inadequate I was as a songwriter. It really made me hard on myself and very critical of the material that I wrote. But it also made me want to work harder.
“Over the past three or four years, I’ve become much stronger at it. It took me a long time to know that a song I wrote had the caliber to stand up to anything else that was out there. I’ve found that as I’ve matured, my favorite songs to write are ones that have a moral foundation, some insight, some substance and a message.”
His journey as a record producer began with 1993’s “Renegades, Rebels and Rogues” from the soundtrack of the movie Maverick. His Platinum-selling 1994 CD I See it Now had three self-produced songs on it. The Double Platinum Time Marches On (1996) and Gold-selling The Coast Is Clear (1997) each contained five tunes that the artist co-produced. Then came the 1999 all-star collection The Civil War: The Nashville Sessions, the first full album he guided.
“That was a big step for me as a producer, working with other vocalists and taking things I’d learned by working with myself and applying them to people like Trace Adkins, Travis Tritt, Deana Carter and John Berry.”
He co-produced his own Lessons Learned (2000), as well as its successors Tracy Lawrence (2001), Strong (2004), For the Love (2007), All Wrapped Up in Christmas (2007) and the Grammy Award nominated The Rock (2009). Along the way, Tracy Lawrence has picked up a number of other accolades. He was Billboard’s Top New Male Vocalist in 1992. The following year, Performance named him New Country Artist of the Year and the Academy of Country Music honored him as Top New Male Vocalist. Country Weekly gave him top awards in 1995 and 1996, and both the Country Music Association and Academy of Country Music gave him 2007 statuettes for his No. 1 smash “Find Out Who Your Friends Are.”
“In my career, I don’t really need to prove any points anymore. I don’t feel like I’m searching for anything. I just want to keep on being creative.”
The former hell raiser has found happiness in his personal life, too. His 2000 marriage to wife Becca and his devotion to their daughters Skylar, born in 2001 and Keagan, born in 2003, have matured him immensely.
In Nashville, he is famed for his massive annual turkey frying for the homeless each Thanksgiving. His golf tournament raises funds to battle breast cancer. Over the years, he has devoted his time and talent to many other causes and charities.
“I feel very content,” says Tracy Lawrence. “I feel very happy in my life, in my home and in my career. It’s a really good place to be in my life. I’m moving on, and I plan to be around for a long while.”