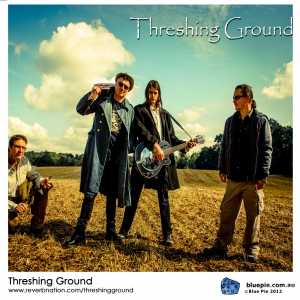 Threshing Ground were formed in 2010 by Gary Marsden, “Barry Island” of legendary British punk rock band The Tights. After a dispute about a cancelled American tour, Gary decided to go backpacking around India and South-East Asia. With a battered old acoustic guitar bought in the market in Kathmandu, Nepal, he started to thrash out the bare bones of some new songs. Themes of love and loss, betrayal, yearning for new experiences, and a leitmotif that “this is not a rehearsal”, pervade the new material.

Things really galvanized creatively in Ho Chi Minh City, Vietnam. Inspired by tales of the “American War” and after chatting to an Australian Veteran, Marsden penned “Saigon Honey”. A tale of a traveller in Saigon missing his tall Aussie girlfriend and the crazy times they had together.

In Sydney Marsden really found his creative groove. Sharing a house in Newtown with local songsmith Ernest Ellis, Gary regularly did open mic slots at The Sandringham Hotel (“The Sando”) on King Street. On one of these occasions top of the bill was Sydney chanteuse Belle Phoenix. She was so impressed with the rawness of the material, that she asked him to join her band as bassist for an American tour. He decided instead, to return to the UK to put a band together and record an ep.

“I’m in Love with a girl called Vinyl” is a quirky punky pop tune that describes an encounter between the author and a skaterpunk who nearly crashed into him on King Street. Later, when he saw her kissing her girlfriend at the Courthouse Pub, the theme was set.

With this, Gary based their band name from the idea of having hit rock bottom to the point of being our most vulnerable. As a result, Threshing Ground create music which epitomises these moments in which we are most receptive to spiritual or creative ideas. This raw state is the mood that the band tries to achieve in its songs.

No song expresses this feeling more than “Circumcised Heart”. A jilted love ballad in the style of Roy Orbison but with a scorpion lurking in the background. The song encapsulates the excruciating agony of loss, but also the animalistic desire for revenge.

Gary Marsden is responsible for the lead vocals, acoustic guitars and Burns 12-string electric. Which, together with the Vox organ, give the material a surfy retro feel.

The ep was engineered and co-produced by Garry Low and recorded at Glow studios in Malvern, UK. He also plays drums and percussion in the band and has formerly worked as a drummer for folk singer songwriter Martin Furey as well as world famous violinist Nigel Kennedy.

Multi-instrumentalist talent James Burnham is responsible for the soaring string arrangements of the multi layered violins. He also plays some of the jangly clean guitars.

The throbbing pulse and backbone of the band’s sound comes from the punky funk bass playing of Ralph Tittley. Ralph also directed the video for “I’m in Love with a Girl Called Vinyl” and designs all the album covers, keeping all the creative output in-house.

Ray Mytton plays the bouncy Faces style busky mandolin on “Saigon Honey”. Ray is also a bloody good bloke for lending his Takamine acoustic guitar when the band couldn’t get a decent acoustic sound during recording.

Back in 2013, Threshing Ground launched their new album to the world. With the bands cult fan base growing and more and more people discovering that you can love a girl called “Vinyl” the band made sure 2013 was their biggest and most commercial year to date.