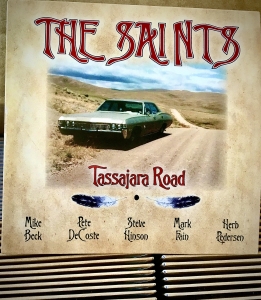 Los Angeles, California– What would happen if Tom Petty, Brian Wilson, Ramblin’ Jack Elliott and Stephen Stills decided to make a record and go on tour? I guess we’ll never know but you might wonder while listening to the debut record from the supergroup The Saints featuring Mike Beck, Herb Pedersen, Steve Hinson, Mark Fain and Pete DeCoste called Tassajara Road. Adding an essential element to the cannon of the “West Coast Sound”, Tassajara Road is an album of songs written by Mike Beck and produced by Herb Pedersen with band members Beck, Pedersen, Hinson, Fain and DeCoste contributing instrumentation and harmony vocals. The result is a loping musical ride that makes you feel like a cowboy surfer poet with a love of California cultural history wrote it. Oh wait…he did!

In 2015, Mike Beck was playing an Americana festival in California. Also in the lineup were legendary musical partners Chris Hillman and Herb Pedersen. Backstage, Mike asked Chris to sign his B-Bender Telecaster. Chris obliged and then left the room, leaving Mike and Herb to strike up a conversation that included California Bluegrass and Clarence White. They quickly found common ground, a love for the music that came out of Southern California in the late sixties and seventies. Herb Pedersen had played a pivotal role in creating that sound, contributing to countless legendary sessions and touring with the best of the best as a key band member singing harmony and playing guitar and banjo.

After hearing Mike’s talent on the B-bender guitar, Herb invited him to Los Angeles to play on some sessions he was producing. Then upon hearing the songs Mike was writing, he extended the further compliment of suggesting they record a few with him producing. Herb called some musician friends, Mike called some musician friends, and a session was booked with Rob Matson as engineer. Everyone was excited about this new project. With Herb producing, the band jelled and the songs flowed with a west coast vibe reminiscent of records made in the heyday of California’s golden era of Country Rock. Everyone was having a blast. Everyone wanted to do more. "Let’s have a band…let’s play out live!" That was the spirit that became The Saints.

Seven-time Grammy winner Mark Fain earned the bass spot In Ricky Skaggs’ band Kentucky Thunder in 1995. He toured with Skaggs for 17 years. While much of his time has been spent on stage performing, Fain is equally at home in the recording studio. In a career now spanning three decades, he has appeared and recorded with artists including Jack Black, Roseanne Cash, Ry Cooder, John Fogerty, Chris Hillman, Bruce Hornsby, Alan Jackson, Martina McBride, John Oates, Joan Osborn, Dolly Parton, Tom Petty, Ricky Skaggs and a long list of others.

A highly in-demand session player, Steve has played and toured with some of the true greats of country music. His resume includes 10 years playing lead guitar for arguably the greatest country singer of all time, George Jones and over 25 years playing pedal steel for Randy Travis. Steve has also played with Ray Price, Vern Gosdin, Carl and Pearl Butler, and Dolly Parton.

Through the ’80s and ’90s, Pete worked with a variety of artists including Blues greats Hubert Sumlin, Pinetop Perkins, Bo Diddley, Paul Butterfield, James Cotton, Jimmy Rodgers, Felix Cavaliere, PF Sloan, and others. Pete toured throughout Europe, Canada, and the US, opening shows for Joe Cocker, Santana, Dr. John, Living Color, Los Lobos and others. In 1997, he joined a nostalgia tour with Rock and Roll Hall Of Fame legend Dion Dimucci, playing across the US. A move to Los Angeles in 1999 introduced him to a new community of artists, including Craig Elkins, Rob Larkin, The King Bee Boys, and Wayne Kramer. For the last five years, he’s been working/drumming with Herb Pedersen on a variety of great projects.

Mike Beck is an engaging electric and acoustic artist who tours extensively in the United States and Europe. He is a regularly featured performer at the esteemed National Cowboy Poetry and Music Gathering in Elko, Nevada. A diehard fan of the West Coast Sound Mike’s strong command of the guitar and playing reminiscent of Steven Stills, sets him apart in a way that has garnered him many request for guitar workshops at festivals. Mike is a seasoned performer — his guitar work and warm, genuine style engages audiences with his songs and stories.

According to Ramblin' Jack Elliot, "Mike Beck plays the guitar like a Byrd. His strings do things that mine could never do. They obey the slightest finger-touch commands like a fine Reining Horse." A true student of groundbreaking guitarist Clarence White’s B-Bender playing, Mike has performed with the inventor of the B-Bender and member of The Byrds, Gene Parsons. "Mike Beck is a very tasteful, soulful guitar player, both acoustic and electric, with shades of Clarence White Stringbender,” says Parsons.

The Western Horseman magazine recently picked "The 13 Best Cowboy Songs," and included two compositions by Mike, putting him alongside other writers such as Ian Tyson, Tom Russell, Lucinda Williams, and Gene Autry. Mike has seven albums under his belt with original songs that have been recognized as some of the finest compositions on Western Americana out there.

The Saints will tour limited West Coast dates in support of their new EP release Tassajara Road, along with songs from Pedersen’s catalog, other Mike Beck originals and some cover songs they just love. The whole band is in it for the right reason, the love of the West Coast Sound.