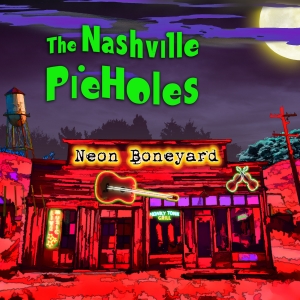 Click here to go to The Nashville Pieholes - Gimme Twang


NEON BONEYARD
Neon Boneyard is The Nashville PieHoles' third project, released in September 2016. We started the tracks in March 2016 but we had to have this EP completed and the product on the shelf before our performance at the Tennessee Songwriters Association International Record Store on Sept. 9, 2016. 6 months isn't a lot of time, it was a race against the clock but I was able to deliver them to the store director on Sept. 7th. That was close! Good thing it wasn't ten songs.

We wrote this in 2011 or 2012, before The Nashville PieHoles even formed. Frank had the title and we laughed and chuckled about the pink hammer. I actually have a pink hammer.

It turned out to be real traditional country sounding which is great but I had a problem about the last line of the chorus not rhyming enough with the word "woman" it was about having a baby. We were close but not there yet.

One day I was playing around with it and Bruce (Miller) our fiddle player (also a #1 music row hit writer) was at the house and heard me playing it and really liked the song. I told him about the line that wasn't quite working for me and immediately he said, "how about...could you stand the pain of a baby comin'"

That's the line we needed!

This is a fun poke at relationships. It's a stock title so we decided to redneck it up a little, Bruce has such great imagery and lyrics, he was cracking me up! It's a lot of fun to play!

The title was given to me (Annette) by some friends about a woman they knew who was going out with a guy that she was so sure he was going to ask her to marry him, she went out and got her wedding dress! She said "Honey, I got my weddin' dress on layaway and my man on hold".

It was fun to write and I know it will connect with a lot of gals out there planning their big wedding day. Wrote this with Trinity Bradshaw, a fabulous young singer from PEI Canada who now lives in Calgary, Alberta.

This is an ideal radio single for her(or other female artists)...and on her version she yodels at the end...very cool!

Max had the title for a while which is very cool, it's the title track of the EP. The Neon Boneyard is a place where the hardcore honky tonkers can hang out when they leave this earth. At least their spirit can still enjoy such a place.

Every album has to have a drinking song right? This was written on one of Canadian singer Trinity Bradshaw's trips to Nashville with her manager at the time, Trey Mills back in 2014 I believe.

The Nashville PieHoles started playing it at shows and got a good response. You can't beat that undeniable cadence that is used time and time again.

We decided to record it on our EP Neon Boneyard and had it almost finished when Trinity came back to Nashville for another writing trip and thought it would make a great duet so when she came over to write, she put down some vocal tracks and Max pieced it together. The vocal recordings sound a bit different and now you know why.

We sang it together at our CD release party Sept. 2016 and it sounded great as a live duet. Trinity is such an amazing singer. Incredible guitar solo by Howie too!

The Nashville PieHoles - Biography
This is the story of 3 and a half Canadians and a Texan (they had to balance it out). Annette Barkley, Max Hutchinson, Howie Moscovitch, Bob Nobles and Bruce Miller who move to Nashville, Tennessee at different times to pursue their music careers. They eventually meet, become friends and collaborate. Each having their own style of music that collectively becomes a retro/twangy-country-punk/hillbilly sound they like to call "Stonesy & Jonesy" forming The Nashville PieHoles on March 14, 2013. On their agenda is: Writing cool songs, performing, recording and having fun! (They also bake wonderful homemade pies.)


Annette Barkley grew up in Southern Ontario, Canada on country and bluegrass music. In 1992 Annette moved out West to Calgary, Alberta Canada. After playing the guitar and writing songs for many years she knew she wanted to be a professional songwriter. In 2001 she drove her 1979 Ford Fairmont Futura three thousand miles to Nashville, TN.


Bob Nobles grew up in Denton, Texas, influenced by Michael Martin Murphy and other songwriters who were students at North Texas State University. He moved to Austin in the early 70's to be part of the Country Rock scene, where he played in several bands.

In 1981, he made a pilgrimage to Nashville to check out the songwriter community and never left. Bob plays upright bass, guitar, and mandolin and early in 2017 he released a new CD of his own original country/Americana songs titled "Windmills and Wheatfields" which is on AirPlay Direct.


Bruce D Miller launched his career in the 70's, a well known figure on the Toronto folk club scene. Performing his original songs for loyal crowds, Bruce could also be seen on stage providing fiddle accompaniment for Ronnie Hawkins. Soon to follow was the release of Bruce’s signature single “Anna Marie”, and his debut album Rude Awakening produced by David Foster and Gaye Delorme.

Over the course of his career, Bruce has penned hit songs for Reba McEntire, Rascal Flatts, the Dixie Chicks and Patricia Conroy, as well as cuts and singles with various artists including Poco, Mae and Me, Shari Ulrich, and The Nashville Pieholes. Bruce makes a perfect addition to The Nashville PieHoles playing fiddle, singing and writing songs.