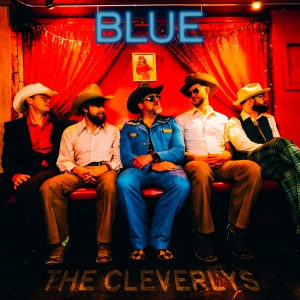 Arden, North Carolina (January 29, 2019) — From the deep Ozark hollows of Cane Spur, Arkansas, The Cleverlys have been plucked from obscurity and landed in the studio to produce their first national label release, Blue, available March 22 from Mountain Home Music Company. With songs like Beyonce’s “Irreplaceable,” LMFAO’s “Party Rock Anthem,” Justin Bieber’s “Baby” and The Zombies’ “She’s Not (Ain’t) There,” this music would be at the edge of being full camp if it weren't for the obvious vocal talent and stellar picking that holds up to any of today’s progressive acoustic bands.

“If Earl Scruggs, Dolly Parton, and Spinal Tap spawned a litter of puppies, it would be The Cleverlys.” — The New York Times.

The group brings the comedy it's been hailed for in national touring to this new recording, the first on the award-winning Bluegrass label, Mountain Home Music Company. The 5-piece includes vocalist and guitarist Dr. Digger Cleverly, the band patriarch who often refers to the outfit as the Cleverly Trio; Ricky Lloyd Cleverly on bass and vocals; DVD Cleverly on banjo and vocals; Cub Cleverly on mandolin and vocals; and Sock Cleverly on fiddle and vocals.

The lead-off track “Baby” is a cover of the Justin Bieber hit, but with The Cleverlys’ Bluegrass treatment, it sounds like Flatt and Scruggs could’ve written and recorded it. Released last fall as the first radio single, the song got immediate attention on the Bluegrass Radio charts. Digger says on Cleverly Mountain, the anticipation for the world to hear the song, recognizable only by the original lyrics, was at an all-time high. “We haven't had this much excitement up here since Cub became the first recipient of a pig bicuspid transplant. You can't even tell he has a pig tooth until he sings in his falsetto,” Digger says.

The album travels through a land of whimsy and impressive musicianship and vocal performances that alternate between Digger in full Ozark-voicing on “Milkshake” and “Blue” to a more sincere approach on the classic Seldom Scene song “Wait A Minute.” With the appropriate treatment of each song, the additions and augmentations to lyrics bring out the tongue-in-cheek irony. The “Milkshake” tag line “...with a little bit of mustard and a pickle on the top” is a subtle change that brings The Cleverlys’ flavor to the Kelis hit.

Their version of the Zombies classic “She’s Not There” changes the vernacular to “she ain’t there,” an apt illustration of the band’s characteristic style. Digger reflects on the decision to record this track saying, “This song reminds me of my second wife. She ran off with a phone book salesman. Said she wanted someone with a ‘future.’ He was the one that pulled off that egg heist down at the hatchery. Last I heard, she’s raising barn cats, and he’s selling door-to-door dentures.”

Some might assume the album title Blue is a reference to Bluegrass, until they see The Cleverlys have included Eiffel 65’s Pop hit of the same name. With mandolin harmonics and acoustic instrumentation true to the original, the band’s picking ability shines.

From songs that seem to be reworked into a Bluegrass/Pop-Country fusion like “What’s Up,” to acoustic treatments of songs like “Party Rock Anthem” that stay true to the hits' original arrangements, The Cleverlys walk an ingenious line between parody and synthesis.

Digger says “What’s Up” makes him recall a feeling he once had after a yard accident. “My cousin Shakey challenged me to a race, him on the riding lawn mower, and me on foot running backwards. I was sure I could beat him cause I can run faster backwards than I can forwards due to the reversed ligaments in my knees and the oblong insoles on my feet. Anyways, Dwayne said go, and Shakey thought he said mow, and he ran over my foot, severing my pinky toe off my left foot. The medicine they gave me after surgery made me feel like this song sounds. I love the song, but when we play it live, I have the urge to wear steel-toed boots.”

Of “Party Rock Anthem,” Digger says, “It was a gift to the world from LMFAO and now we are regifting it. It’s the meaningful lyric that touches me, while it’s me that touches my wife. I’m hoping that folks don’t get too wrapped up in the serious nature of this song and allow their bodies to move the way they want to move!”

An original titled “Girl In the Sky” was written in memory of Digger’s first wife who he claims was a literal alien. “She was a trip and a half, man. She was a LOT of fun, but alien chicks have a tough time with anger. And when she got mad, she got ‘physical,’" says Digger. “She didn’t get violent, she actually pulled out a VHS of Olivia Newton John’s workout tape ‘Physical,’ which is a healthy way to deal with anger, and she looked great in the tights. I see my daughter ‘Burk Burk’ on weekends and holidays.”

Blue offers something for everyone with a sense of humor. Pulling from several decades of music it also hints at what fans can expect from live performances. “I’m Gonna Be (500 Miles),” The Proclaimers hit, rounds out the album as it is followed by the Ralph Stanley classic “Oh Death,” made popular by the movie Oh Brother Where Art Thou. The Cleverlys give it a Hip-Hop treatment using a drum machine and auto-tune vocals by Ricky Lloyd Cleverly. “Plain and simple, it’s a tribute to two of the biggest influences on our music, T-Pain and Dr. Ralph Stanley,” says Digger.
Every art form needs to be able to laugh at itself, and The Cleverlys do so, without making a mockery of the genre. Make no mistake, Blue is as phenomenal as it is clever Pop-Bluegrass fusion.
14
What's This
Advertisement