Dysart Family- "The Grace Of God" 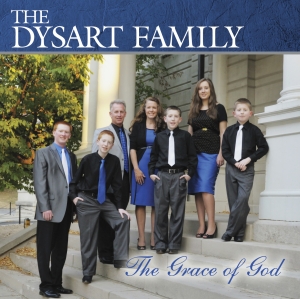 The Dysart Family offers Southern Gospel fans unique, close family harmonies, with a diverse and powerful selection of music, many of them written by Kendra and LeWain Sr.

LeWain and Lorena Dysart, with their five children, began performing in various venues in 2006 and began releasing CDs in 2007. The Dysart Family, based in Macon, Missouri, is signed with Crossroads Records, one of gospel music’s largest record labels, and tour nationwide. They were nominated for Horizon Group of the year in 2012, and in 2014 were voted one of the top ten nominees for New Mixed Group in the Singing News Fan Awards. They saw their first radio single, Up and Away, chart at #28 on the Country Gospel Top 100 in February, 2012, and their current single, an original song written by LeWain Sr. entitled God’s Love Is So Amazing, charted at #46 on the Singing News Top 80 charts in January, 2014. The Dysart Family has had the

privilege of sharing the stage with Legacy Five Quartet, The Talley Trio, The Lesters, and Tribute Quartet.

The Dysart’s approach to their music ministry incorporates a serious focus on personal relationships with Jesus, their love for each other in the home, and just plain hard work on their music. What they end up with are blessed times of worship in concert, complimented by a tight family blend that is distinctive to The Dysarts. Original songs from the daughter, Kendra, and Dad, LeWain, some fun times, and laughter at Dad’s silly stories of life in the home, all add up to a concert that no one wants to see come to an end.

Kendra and LeWain II join Mom and Dad for close family quartet harmonies, trios and duets. Kendra’s lead voice has people talking about how such a voice can come from such a young lady, while LeWain II’s deep, smooth bass adds that something extra that everyone wants to hear from a quartet. Lorena, the mother, adds her rich alto to the mix and LeWain, the father, joins in with the tenor. All combined you get a unique family blend that is simply the Dysarts. It is the highlight of the concert when the three younger boys join the family to sing a few songs in each concert.

Debra Talley, of The Talley Trio, says “I know they are going to bless you when you come to one of their concerts, so don’t miss one.”
2
What's This
Advertisement