Ted Snyder - Country For Everyone 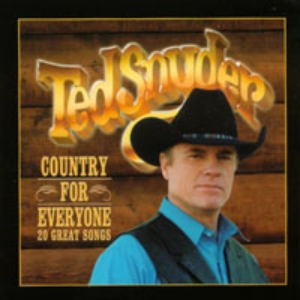 SPECIAL: 20% discount if you buy more than one copy of it today!


"Country for everyone" is a double album with a mix of styles from traditional country,country rock, rock-a-billy, 50s, and country love ballads.tracks

For singles go to links below.

Ted Snyder has worked with some of the nations top musicians both in live performance and in the studio recording. Some have written letters of recommendation and praise. Examples: Jay Lacy, band leader and lead guitarist for John Schneider. John Barrafato, piano for Glen Campbell. Linn Phillips, guitarist for Collin Ray.You can hear many of them on his double album ""COUNTRY FOR EVERYONE". Ted has appeared on tv and on radio specials. Ted Snyder's first two songs released with Western Heart Promotions put him on the prestigious "World Wide Most Played Artist Chart." His music's acceptance is thrusting him into the world wide market. His unique style placed him in this chart many times in the last 2 years. After a successful tour of some European countries he is to be scheduled to return. Audience acceptance has moved his music to the "Hot Country Singles Charts as well as other charts. Ted has his own distinctive style but with a touch of the past. You could call him a "Country Rock Cowboy" or a "Rockabilly Cowboy"with the "Clint Eastwood" type of appeal.
In whatever category you place Ted Snyder's music, it will be with a touch of emotion. You will find Ted Snyder's excellent voice and style at home with Traditional Country,gospel, ballads,country rock, Rockabilly .
Ted has played in the clubs and casinos in northern and eastern Nevada for several years. He has been chosen to be the "Featured Artist" on the Cybertunes.org music page for two years.
Showing his versatility listen to his "Swamp Rock" album. This is an earthy,bluesy,southern rock groove with a touch of country .
His newly finished country gospel album, "What would you give" arranged by Marvin "Smokey" Montgomery" (arranger with multi-nominations for Grammys) promises great things. "Smokey" has worked with many top artists including the Blackwood Bros. , Jordinaires. Ted now lives in Oklahoma .