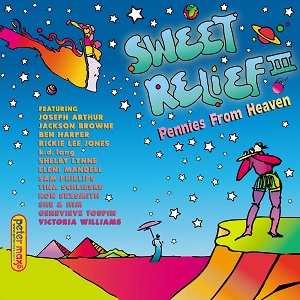 The album was conceived and produced by Sheldon Gomberg at L.A.’s Carriage House, in several cases working in collaboration with the featured artists. Gomberg has produced or recorded albums for several of them, including the most recent albums by Harper and Mandell’s The Living Sisters. The vocalists were backed by a revolving cast of skilled players, including drummers Pete Thomas (Elvis Costello’s longtime tub thumper), Jay Bellerose and Don Heffington, guitarist Brian Ray (Paul McCartney) and Gary Mallaber (who played vibes on Van Morrison’s original version of ‘Crazy Love’), with Gomberg and Davey Faragher (of Costello’s current band the Imposters) splitting most of the bass parts. Vanguard is releasing the album in support of the Sweet Relief Musicians Fund, which provides financial assistance to all types of career musicians who are struggling while facing illness, disability or age-related problems.

Gomberg explains what inspired him to undertake the project: “When I was diagnosed with MS and first started having trouble walking, I could no longer get up the stairs to my house, so I had to replace them with a lift, and Sweet Relief helped me. I started thinking, ‘Well, maybe I could help pay them back somehow for their kindness to me.’ So I put together this concept, talked to them about it and after a little while it flew. Then I went to work putting the whole thing together. I did pretty much every step of it, from the germ of the idea to producing, recording and mixing it. So if you hate it, it’s probably my fault,” he quips. No chance of that reaction from any listener with taste or a heart.

Each of the artists on Sweet Relief III: Pennies From Heaven selected a song addressing to a greater or lesser degree what Gomberg explains was “a loose concept” related to need or help. The Toronto-based Sexsmith, the first artist to record a track for the project, jumped at the opportunity to tackle the standard Johnny Burke and Arthur Johnston-penned “Pennies from Heaven,” acknowledging that he’s a big fan of Bing Crosby, who popularized the uplifting Depression-era song. At that point, Gomberg knew he had the album’s title and its opening track. Sam Phillips also dipped into the Great American Songbook for the album’s most tongue-in-cheek selection, Cy Coleman and Dorothy Fields’ “Hey Big Spender,” from the musical Sweet Charity. Victoria Williams chose Sam Cooke’s uplifting “A Change Is Gonna Come,” while Rickie Lee Jones departed from the album’s theme but sustained its poignancy and SoCal-centric feel, covering the Beach Boys’ “Surfer Girl.”

The rest of the contributors were similarly eclectic in their song selections: Oscar Brown Jr.’s “Brother Where Are You” (Lynne), Townes Van Zandt’s “If I Needed You” (Arthur), Merle Haggard’s “How Did You Find Me Here?” (lang), Roger Miller’s “King of the Road” (She & Him), Morrison’s “Crazy Love” (Harper), Randy Newman’s “I’ll Be Home” (Mandell), the Beatles’ “With a Little Help From My Friends” (Tina Schlieske, onetime frontwoman of the ’90s band Tina & the B-Side Movement) and Neil Young’s “Heart of Gold” (Canadian newcomer Genevieve Toupin).

Browne’s poignant, album-ending solo performance of Warren Zevon’s “Don’t Let Us Get Sick” was a labor of love for both the Hall of Famer, who championed Zevon and produced his first two albums, and for Gomberg, who was the late artist’s last touring bass player. “To be able to do that track with Jackson, who started it, and me, who ended it, was kind of heavy for both of us,” he says.

Vanguard was eager to be part of this musically captivating humanitarian endeavor. “I’ve known those guys for 15 years and I like them a lot,” he says. “I’d brought The Living Sisters to Vanguard, and when I brought them this record, they responded really well—they said it would be perfect for them. And the rest is history.”

Some background from Gomberg’s mission statement, written prior to the recording: “Sweet Relief Musicians Fund was started by Victoria Williams in 1993 after Victoria was diagnosed with MS while on tour with Neil Young. Musicians rarely have adequate medical insurance, and Victoria was no exception, and was without insurance. Medical costs can easily skyrocket, and Sweet Relief was started to help musicians faced with these problems, which they have done quite commendably. The charity, which also helps musicians in financial trouble, relies solely on donations from outside sources and funds raised from benefit events largely executed by the music community.” Sweet Relief III: Pennies From Heaven will serve the same purpose.

“For me personally,” Gomberg wrote at the time, “this is a chance for me to give back to Sweet Relief, who gave to me when I needed it, a chance to give back to the music community as a whole, who have supported me throughout the years, and an opportunity to work with my friends and artists who have inspired me. I am personally thrilled beyond belief that this dream has become a reality and the spirit of this music community has been so fantastic, open, and giving.”

Now that the project is ready for the world, he says, “I’m really, really happy with everybody who was involved with the record. I’m ecstatic to have worked with them all, and I think every one of them did a fantastic job.”

Browne puts everything in perspective, explaining: “Musicians are always among the first to give their energy and talent to help other people in times of emergency, though they are very often without health insurance themselves, and need our support when they fall prey to illness and hardship. Sweet Relief has been helping musicians for years, and has helped some whom I am very much indebted to for enriching my life. I am very happy to take part in this CD project, and for the chance to support Sweet Relief’s very soulful work.’