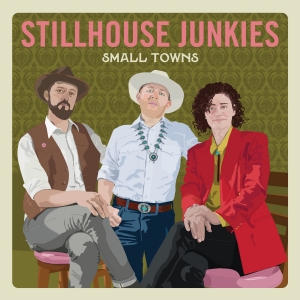 COLORADO BOUND is the first single from the band's up-coming album "Small Towns".

"Colorado Bound tells the story of my grandfather, Al Kosak, driving from Duluth, Minnesota out to the Pacific Ocean in the early 1950s. He took the family Ford station wagon and kept his speed at 35 miles per hour the whole way since he’d calculated that would give him the best gas mileage. I don’t know how long it took him, but he eventually made it all the way to the California coast." - Fred Kosak

The wallpaper pattern used in the Colorado Bound single artwork comes from the Diamond Belle Saloon, the Strater Hotel’s iconic piano bar in downtown Durango. It’s both a piece of local history and a nod to our close relationship with the hotel as the annual headquarters of the Durango Bluegrass Meltdown festival. Each of the upcoming singles from our Small Towns album will feature a different wallpaper pattern from the Strater.

Cowboys, aliens, and mysterious disappearances set against the backdrop of the rugged Uncompahgre Wilderness near Ridgway, Colorado... the song practically writes itself! Cody's song is also a tribute to the town of Ridgway and the many great shows we've played up there.

Artwork and layout by Tim Kapustka

The latest single is a spirited cover of the beloved Fleetwood Mac hit and effortlessly blends their eclectic influences — from Folk to Bluegrass.

"We spent months searching for the right cover to include amongst these other songs. It had to be one that had the right vibe and theme and felt like it fit naturally into the band’s repertoire. We are all huge fans of Fleetwood Mac’s 1977 'Rumours' album and, once we settled on an era and sound, this one was an easy choice." - Stillhouse Junkies


SONG BLURBS
Moonrise Over Ridgway
Cowboys, aliens, and mysterious disappearances set against the backdrop of the rugged Uncompahgre Wilderness near Ridgway, Colorado… the story practically writes itself! This song is also a tribute to the town of Ridgway and the many great shows we’ve played up there.

Over the Pass
“Over the Pass” imagines a cattle driver at the end of a long trip, prepared to trade any concerns about what problems he’ll face when he returns home for the simple comforts of his cabin and focused, for the moment, on the one task that remains.

Evergreen
All three of us left our hometowns at some point to live and work elsewhere, only to realize with that fresh perspective that maybe things back home weren’t so bad after all. Evergreen is a song for anyone who has taken that journey in their life.

River of the Lost Souls
The Animas River that flows through Durango, Colorado was named for a group of Franciscan monks who disappeared while exploring the canyons on the western edge of the modern-day Weminuche Wilderness. No last rites were given as the bodies were never recovered; hence the river’s full name, El Rio de las Animas Perdidas.

Never Going Back Again
We spent months searching for the right cover to include amongst these other songs. It had to be one that had the right vibe and theme and felt like it fit naturally into the band’s repertoire. We are all huge fans of Fleetwood Mac’s 1977 “Rumours” album and, once we settled on an era and sound, this one was an easy choice.

Half a Pound of Silver
The mining ghost town of Ironton, Colorado lies just over a pass north of Durango. When the silver market collapsed in 1893, many of its residents headed elsewhere in search of better work. This song imagines the life of an Ironton miner from the town’s founding until its eventual abandonment.

Colorado Bound
Colorado Bound tells the story of Fred’s grandfather, Al Kosak, taking a road trip across the country to the Pacific Ocean in the early 1950s. He figured out that he would save the most money on gas at a speed of around 35 miles per hour, and stubbornly kept it in 3rd gear all the way to California.

El Camino
El Camino is a lighthearted story about living spontaneously in the moment. Give it a listen and try imagining something that brings you pure joy! The band is honored to feature the incredible Becky Buller on both the twin fiddle part and a sizzling solo.

1963
Getting old has its drawbacks, but it also brings out flavors and sensations in life that were less noticeable before. On a higher level, this song seeks to explore the idea that youth is wasted on the young. On a lower level, it’s also an ode to single malt whiskey, in all its glorious complexity.

Five Doors Down in Leadville
We had never actually visited the 10,200’ mountain town where this song is set when it was originally written, but it’s loosely based on a conversation we overheard at a wedding about one of the groomsmen moving into a new spot up the road in Leadville, five doors down from his friend.

On the House
Having all grown up in small towns ourselves, we were always amazed that people could date for years, break up, and still go to the same bar on Friday night. This song casts the bartender as one of those characters, coping with heartache in a town where no one can stay out of anyone else’s way for very long.

Haskell Town
There is a theory that the 1918 influenza pandemic originated at Fort Riley, an army base in North Central Kansas. When American troops were deployed to Europe, they brought the virus with them and it spread like wildfire through the World War I trenches. Haskell Town is the story of one soldier caught up in the conflict.