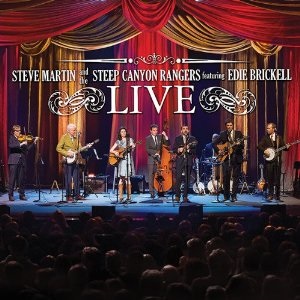 With music supervision by the renowned Peter Asher (Linda Ronstadt, James Taylor), the concert features material from Martin and Brickell's GRAMMY-winning collaborative album "Love Has Come For You" as well as songs from “Rare Bird,” Martin’s highly acclaimed GRAMMY-winning project with the Steep Canyon Rangers in addition to music from his GRAMMY-winning solo album “The Crow: New Songs for the Five-String Banjo.”

Steve Martin is now in the fifth decade of a varied and accomplished career as a comic, actor, musician, author and playwright. Recently honored by the Academy of Motion Picture Arts & Sciences with a Governor’s Award special Oscar, he is also a GRAMMY-winning, boundary-pushing bluegrass banjoist and songwriter.

Edie Brickell initially burst onto the national scene in the late 1980s fronting the New Bohemians, and has since carved out an iconoclastic solo career that's solidified her reputation as a uniquely compelling singer and a songwriter of rare insight.

Although these new musical partners have already built widely respected individual bodies of work, their inaugural collaboration is a creative milestone. Martin and Brickell's recent GRAMMY win in the category of Best American Roots Song for "Love Has Come for You" marked Brickell's first GRAMMY Award and Martin's fifth, including his two wins in the comedy field.