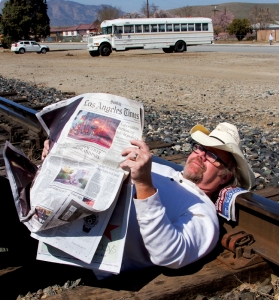 Great storytelling, a dose of humor and a powerhouse backing band lend themselves to Stephen David Austin’s upcoming release …

Los Angeles, CA 2.14.2012—The wry gallows humor of Stephen David Austin is evident on his upcoming release, A Bakersfield Dozen (due May 8, 2012). When explaining why he is a ‘three-named’ performer, Austin tells us, “If I released the CD as Steve Austin, I ran the risk of being confused with the ‘Six Million Dollar Man’ of 1970’s television fame, or the ‘Stone Cold’ wrestler-turned-actor.” Backed by stellar musicians, the Tehachapi singer-songwriter emphasizes raw roots music and great storytelling. “If you can’t tap your feet to it, or tap your beer bottle against the tabletop”, Austin claims, “you’ve missed the target.”

Known mainly as a sideman and cover musician before A Bakersfield Dozen, Austin decided to take the reins of his career with encouragement from both Tom T. Hall and Dave Alvin. “I told Dave how much his music was like my life story,” Austin recently told the newspaper, The Bakersfield Californian. “Then we started talking about Okie history. At one point he said it sounded like Merle Haggard wrote was I was saying. I met him again when he was in town and we started talking about those same things. He finally said his songs were largely autobiographical, which I interpreted as ‘you should write your own life story’.” Austin sent his songs to Tom T. Hall, who wrote back to him that he liked his music and encouraged him to make a living at it, saying, “it’s lots of fun and beats working!”

Music these days seems to straddle several genres, and A Bakersfield Dozen is no exception. There’s a heavy dose of Americana with an emphasis on the Bakersfield sound (including a loving tribute to hero, Buck Owens). There is also great storytelling in the traditional country music sense, with the music running from old-timey string instrumentation through traditional Telecaster twang to in-your-face Americana roots-rock. Change is a constant theme throughout the record, presenting Austin’s vision of life as a subtle yet jarring shift. The subject matter is at times heavy, but his sense of humor prevails, never leaving us alone in the dark.

The 11 songs are autobiographical, with the exception being a cover of the Beatles’ “Baby’s in Black”. The song was covered as a favor to a friend, but Austin also cites the Beatles as leading him to the Bakersfield sound, saying, “I started noticing how much George Harrison played like Don Rich from the Buckaroos, particularly on the Beatles 65 album, where the band covered ‘Act Naturally’.” In “The Day Buck Owens Died”, Austin uses the well-known guitar lick from Owens’ signature song, “Buckaroo”.

The song “Best Ex I Ever Had” was a title that he had for a year before the rest of the words came to him. “I was sitting at a bar, doing shots with the bartender and talking about country songs, when we came up with the title”, he said. “Heroes and Heroin” is a cautionary tale about heroes becoming martyred and romanticized. Austin says that Gram Parsons, Jerry Garcia and Charlie Parker were the inspirations for the song. The song “The Cage” was taken straight from his life. “I picked up a hitchhiker, and as we got to talking, he told me he had just gotten out of prison that day. He was in for beating a man to death. I got a little nervous after that.”

Americana music is a lyricist’s domain, and the perfect vehicle for a storyteller-songwriter like Stephen David Austin. As The Midwest Record wrote about A Bakersfield Dozen “[Austin] displays his love for Buck and Merle but he does it through the eyes and ears of Kinky Friedman and Chinga Chavin. So left of center, it’s a must for subversive alt. country fans that like seeing the envelope pushed so far it tears. This is a great set to play just to see if the people around you are paying attention.”