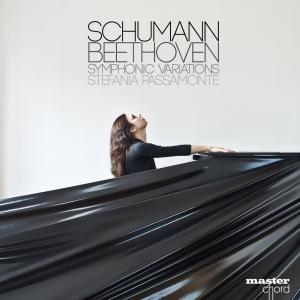 “Passamonte is quickly making a name for herself as a pianist to watch on the international classical music scene. With here majestic interpretation of Beethoven, and now Chopin, here audiences are left wanting more and wondering where will this talented performer take them next as her bright musical future continues to unfold on recordings and in concert halls worldwide.”

“Stefania Passamonte performs...at such a high level of technical expertise, musicianship, and emotion that they deserve to stand next some of the most storied recordings made of these historic works.” Voting member of the Recording Academy for the Grammy’s Awards in the USA , Stefania is a London based pianist from Italy with a wide international experience, from concert performing to solo recording.

“An unusually gifted young musician..”, Stefania has given recitals throughout Europe, some of which were televised broadcasts, including “St Martin in The Fields” in London, National Philharmonic of Ukraine in Kiev, “Sala Puccini” in Milan, Palau da Musica in Valencia, Steinway Hall in London, “Salle Munch” in Paris, "Pomeriggi Musicali" in Venice, Casa da Musica in Porto.

“She has a virtuoso flair and a great imagination but most relevant of all is perhaps that she possesses a rare gift of communication”.
Selected to perform on the stage of the most famous International Piano Competitions as the Chopin Competition of Warsaw, the “Vladimir Horowitz” of Kiev, the “Maria Canals” of Barcelona and the “Jose' Iturbi” of Valencia in Spain, the Porto Competition in Portugal and Beethoven Klavierwettewerbe of Wien, Stefania won several awards and acknowledgements, among which the prestigious “Premio Ghirlandina” given by Modena to an artist “distinguished in the international panorama for special merits and success”.

“Powerfully emotive lines and an impresario air...”
“...a living, breathing performance that is nothing less than stunning.”
Her recordings include major works by Bach, Mozart, Beethoven, Chopin, Schumann and the complete “Transcendental Studies” by Liszt, released by Master Chord Records with great success of critics and public.
Her last releases, “Beethoven Dramatic Sonatas” and “Chopin Heroic” are now competing as Best Album of the Year and Best Classical Instrumental Soloist for the forthcoming 54th Grammy’s Awards.

“Italian born pianist Stefania Passamonte returns with another world-class album full of emotional and technically brilliant interpretations of some of the most beautiful and engaging works by Romantic composer Frédćric Chopin.”
3
What's This
Advertisement