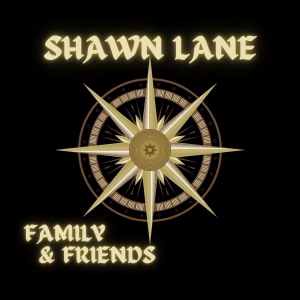 
BIO:
“Shawn Lane is the epitome of a triple threat ~ one of the greatest singers, songwriters, and musicians to ever live.” ~ Sierra Hull, GRAMMY Nominee and IBMA Award Winner.

"Shawn Lane is unbelievable. You think you know how good it's gonna be, and then he comes in and blows your mind." ~ Bobby Starnes, owner of Hatcreek Recording Company.

Shawn Lane is a three-time GRAMMY Nominee and 28-time IBMA Award Winner with Blue Highway. As explosive on fiddle as he is on mandolin and guitar, Lane is a heralded instrumentalist, vocalist, and songwriter. Shawn was nominated as 2015 IBMA Songwriter of the Year, and has written multiple #1 hits for the 26-year strong supergroup he co-founded, Blue Highway. Notably, he also penned his first solo single “I Met the Man,” which topped the Bluegrass Today Gospel Chart at #1 for 7 weeks and spent 28 weeks in the chart's Top 10 in 2018.

Shawn has appeared on CBS-TV on The Late Show with Dan Tyminski, still tours with Blue Highway, and due to popular demand is headlining a handful of shows with his family. Along with the family shows, Shawn will be releasing his third solo album, "Shawn Lane: Family & Friends."

Shawn was songwriter and lead vocalist on Blue Highway's IBMA Song of the Year nominees “Sounds of Home” .. "The Game" (co-written with Barry Bales) .. and “Born with a Hammer in My Hand” (co-written with Tim Stafford).

Single Release: One More
"One common thread we all share in this journey of life that we’re on is that we will be knocked down to the ground several times, by several different things. When that happens, we have two choices: either to stay down, or to get back up. This song is about getting back up, no matter how hard it may seem. With God's help, you can, and it'll sure feel good when you do. I was proud to get the opportunity to write “One More” with one of my best friends, Ronnie Bowman. I hope this song helps someone who may be down to get back up again." ~ Shawn Lane
Released: July 31, 2020


I MET THE MAN
Shawn Lane's dad nearly died in April 2016. He was in a coma on life support for 17 days. But Butch Lane came back with a story to tell. Shawn tells the story beautifully and powerfully in a chart-topping single released on May 15, 2018 ... I MET THE MAN.

THE STORY:
" My dad Butch Lane had a massive stroke in April 2016. He went into a coma after being flown to the university Stroke Center. He was in a coma for two weeks on life support with a machine breathing for him. Doctors said much of his brain was completely dead, with 90% of his brain stem affected. All doctors agreed that if Dad did come out of the coma, he would never regain any body function from his neck down. They asked our family to talk about taking Dad off life support, if we thought that would be his wish.
My mom told the doctors, “We are going to wait, and give him a chance to come back.”
After 17 days, my dad woke up, able to answer questions only with his eyes. Looking up meant ‘Yes,’ and looking down meant ‘No.’ After two months, Dad started moving his arms, and then his legs. After four months, the doctors decided to take the trach out of his neck. When they did, he started to talk.
My dad said, “Not many people get to do what I just got to do.”
We asked, “What’s that?”
He said, “I met the Man.”
Then Dad said, “He reached down and grabbed me, and He said, ‘I can’t let you go now.’ He grabbed my arm and pulled me back.”
That’s all my dad could say before emotions overwhelmed him.
I asked him later, “Dad, what did He look like?”
Dad said, “It was like a mist, and then He was standing there.”
To this day, that’s all he can say before emotions overwhelm him.
In nothing short of a miracle, my dad eventually regained his ability to walk and talk.
And he tells everyone who comes to see him, “Don’t you ever think there ain’t a God, because I saw Him…”

I MET THE MAN. "
45
What's This
Advertisement