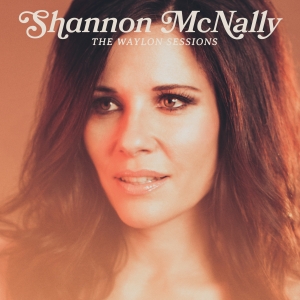 With her new album, The Waylon Sessions, the prolific and wide-ranging Shannon McNally set out to revisit the songs and spirit of Waylon Jennings, a legend with whom she’s always had an ongoing fascination. “I have always loved his defiantly existential but immediately accessible common man’s music and how it boogies,” says McNally. But her collection of tunes ended up being not so much a tribute as it is a recontextualization; a nuanced, feminine rendering of a catalog long considered a bastion of hetero-masculinity.

That’s not to say McNally has a softer, gentler take on Jennings’ songs—in fact, just the opposite. Over and over again, she manages to locate a smoldering intensity, a searing hurt buried deep within the music’s deceptively simple poetry, and she hones in on it with surgical precision on this new album, which features special guests like Jessi Colter, Buddy Miller, Rodney Crowell, and Lukas Nelson. “The world has changed a lot since these songs were first recorded,” says McNally. “I have never heard a woman sing any of them, but these tunes are poignant and relevant to me and to women in general right now. As a songwriter, bringing a song to its full potential so that a larger or different audience can connect is all I’ve ever cared about.”

When Blue Rose’s founder, Joe Poletto, asked McNally the question every artist wishes they could hear when it comes to making a record, “What would you do if you could do anything?” McNally didn’t even need to think before she answered, “An Album of Waylon.” “What Waylon Jennings brought to country music is what country music needs right now, and that unapologetic and vulnerable sense of self are what women are tapping into artistically right now as the industry evolves,” says McNally. “Because of the nature of this business, I’ve spent most of my life moving through a man’s world. I love men and I accept them for the complex critters they are, but when #MeToo started unfolding, I was hearing all these powerful stories and remembering all my own experiences, and I realized just how much of myself I’d been suppressing to get by. The system and the ways I’d learned to survive in it were cracking wide open, and suddenly I felt this freedom I’d never felt before.”

McNally knew that assembling the right band would be essential to capturing Jennings’ mix of laid back charm and swaggering bravado, so she called AMA-winning guitarist Kenny Vaughan (Marty Stuart, Lucinda Williams) to help her assemble a team that included drummer Derek Mixon (Chris Stapleton), pedal steel legend and longtime Jennings bandmate Fred Newell, Texas keyboard mainstay Bukka Allen (Robert Earl Keen, Jerry Jeff Walker), and bassist Chris Scruggs (Marty Stuart, Charlie Louvin). Working live and raw, they tracked sixteen songs in just five days, relying on instinct and intuition to guide their decisions at every turn. As brilliant as the band’s performances are, it’s McNally that breathes new life into the music here, tackling the tunes with an honesty and a maturity that transcends genre and gender. She doesn’t swap pronouns or couch her delivery with a wink; she simply plays it straight, singing her truth as a divorced single mother in her 40’s in all its beauty, pain, and power.

“My goal wasn’t to force anything onto the music that wasn’t there already,” explains McNally. “There’s a feminine perspective hidden somewhere inside each of these songs. My job was to find a way to tap into that and draw it out.” The result is that rare covers record that furthers our understanding of the originals; an album of classics that challenges our perceptions and assumptions about just what made them classics in the first place.

Born and raised on Long Island, McNally has, at various points, called New Orleans, Nashville, and Holly Springs, Mississippi, home, but it was in Los Angeles that she first came to national attention in the early 2000s with her Capitol Records debut, Jukebox Sparrows. Recorded with a Murderer’s Row of studio legends including Greg Leisz, Benmont Tench, and Jim Keltner, the collection garnered high profile spotlights everywhere from NPR to Rolling Stone, earned McNally slots on Letterman, Leno, and Conan, and led to dates with Stevie Nicks, Robert Randolph, and John Mellencamp among others. She followed it up in 2005 with Geronimo, a critically acclaimed sophomore effort that prompted the New York Times to call her “irresistible” and the Washington Post to hail her as “a fine lyricist who often calls to mind Lucinda Williams.”

A restless creative spirit with a magnetic personality, McNally would go on to release a wide range of similarly lauded albums, EPs, and collaborations over the next 15 years, performing on stage and in the studio with the likes of Willie Nelson, Dr. John, Bonnie Raitt, Levon Helm, Charlie Sexton, Derek Trucks, Terry Allen, and many more along the way. In 2018, she partnered with Joe Poletto at Blue Rose to develop her new album, The Waylon Sessions—a collection of songs from Waylon Jennings and his outlaw cohorts. The album will be released on Compass Records on May 28, 2021.
29
What's This
Advertisement