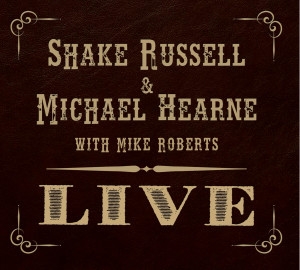 Shake Russell has been making records for going on 50 years now, starting with "Songs On The Radio in 1978 with Dana Cooper. He's been going strong ever since and is a beloved Texas treasure with 30 releases under his belt.

Through the years, Shake’s songs and albums have frequented the Billboard charts, with many, including “Deep in the West,” “You’ve Got a Lover,” “Put Yourself in My Shoes,” “One More Payment,” and “Our Kind of Love” being recorded by such distinguished artists as Waylon Jennings, Jessi Colter, Ricky Skaggs, Clint Black, and Carolyn Dawn Johnson. Ricky Skagg’s hit recording of “You’ve Got a Lover” has appeared on three of Ricky’s albums.

Michael Hearne is a member of the Hearne Family of musical prodigies, hailing from Dallas, Texas. Since the 1970s, he has strolled down a musical path inspired by the great folk and country singer-songwriters who typify and have characterized the Americana “roots” scene.

Michael was a sideman for the amazing Michael Martin Murphy, and is an amazing songwriter/performer in his own right. Today, Michael is often found touring across the southwest with fellow songwriter Shake Russell (with Mike Roberts on bass).
8
What's This
Advertisement