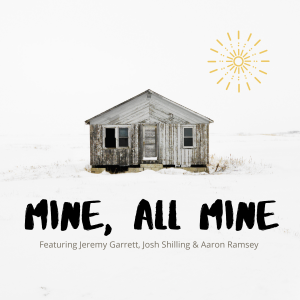 With his newest "solo" single release, Scott Slay has collaborated with some of today's masterminds of the contemporary bluegrass music industry to produce "Mine, All Mine," a song he wrote about his revelation during the Coronavirus shutdown.

"More imaginative, more informed, possibly more intelligent, than many of his compatriots on the scene, Slay is not just another hot shot, of whom there is never any shortage at any given moment. I think he'll be worth keeping an eye on.” -RAMBLES.Net

As a fixture on the music scene for several years, Scott Slay enjoys making music in Denver, CO and the surrounding Rocky Mountain area both as a solo performing act, and with his Bluegrass and Americana group, Scott Slay and The Rail. Scott has won multiple songwriting awards across the United States, and frequently competes in industry settings.

Scott released an album with the Americana group, Big Virginia Sky in 2015 whose self-titled release took them across the country with stints in major folk and bluegrass festivals, and a concluding trip to the International Bluegrass Music Association's (IBMA) 2016 Showcase in Raleigh, NC.

Scott has since created his own group, Scott Slay and The Rail, a bluegrass group based in Denver, CO who placed in the 2018 Telluride Bluegrass Festival band competition and 2nd place in the guitar and mandolin instrumental performance categories at the RockyGrass Festival in 2018.