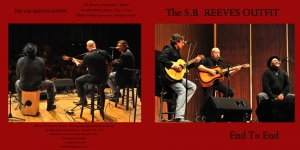 After a career in the background as a writer, poet and creative force...S B Reeves has emerged as a dynamic performing artist.....Over the past decade he has impressed audiences with his mesmerizing presentations by himself or with his band everywhere from the street corner to the Kennedy Center for the Performing Arts.......The album "If You Ignore the Truth" has steadily gained a worldwide recognition as one of the great lyrically driven storytelling style recordings in a generation....Listeners who enjoy Bass also enjoy the works of Tom Petty, John Lennon, The Band, Bob Dylan, Creedence Clearwater Revival, Neil Young, REM, Johnny Cash, Van Morrison, Bruce Springsteen, The Doors, The Kinks and even Metallica.....Musically the influences are everything from Folk to Funk to R&B and the Blues to Rock ,Country and Americana... "Bass" is a member of the Song Writers Hall of Fame. His performing rights organization is ASCAP. He is also represented by SoundExchange....
4
What's This
Advertisement