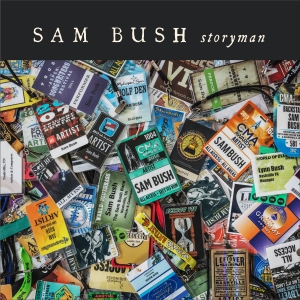 If joy were a person, he’d bring both peace and frenzy. He’d be full of music, light, and energy that soothes even as it stirs us up. Eyes closed, wire-rim glasses in place, mandolin pressed against his ribs, joy would be Sam Bush on a stage.

“I feel fortunate that when it’s time to play, no matter how I feel physically or mentally, once the downbeat starts, my mind goes to a place that’s all music,” says Bush. “The joy of the music comes to me and overtakes me sometimes––I just become part of the music.”

That rapt merging of life and art fills Bush’s new album Storyman, a freewheeling collection that gleefully picks and chooses from jazz, folk, blues, reggae, country swing, and bluegrass to create a jubilant noise only classifiable as the Sam Bush sound. Many of the songs are stories––several of them true––and the legendary mandolin player co-wrote every one of them with friends including Guy Clark, Emmylou Harris, Jon Randall Stewart, Jeff Black, and others.

“I’m hoping it just kind of flows for people and makes them go, ‘Hey! It’s a Sam record. It sounds like Sam and the band,’” Bush says. “But for the first time ever, I also find myself thinking, ‘I hope you enjoy the stories.’ It’s my singer-songwriter record.”

The Father of Newgrass and King of Telluride has long since established himself as roots royalty, revered for both his solo and sideman work, which includes time with Harris, Lyle Lovett, and Béla Fleck. But instead of kicking back and soaking up honors such as an Americana Music Association Lifetime Achievement Award and suite of Grammys and International Bluegrass Music Association trophies, Bush still strives relentlessly to create something new.

Raised on a farm just outside of Bowling Green, Kentucky, Bush grew up plowing tobacco fields in the Southern summer heat alongside his family. He started playing mandolin when he was 11 years old. “I believe growing up on a farm probably helped me channel my energy into learning music and being so interested in it,” Bush says. “Me and my sisters, we all loved it. I’ve often wondered if that’s because growing up on a farm, you couldn’t go ride your bike all over town and horse around like the other kids.”

For Bush, a lifetime of channeling his energy has led to stylistic innovations that have changed the course of bluegrass and roots music alike.

Bush took about four years to record the latest installment in that legacy. “It’s still important to me that all of the songs fit together on an album,” he says. “I’m well aware that people buy individual tracks digitally, and that’s good. But I still think of it as an album––a body of work. And I’m really satisfied with these songs. It’s taken a while, but I sure am happy with them.”

Recorded partially at Neptone Recording Studios in Destin, Florida, and Bush’s longtime go-to the Sound Emporium in Nashville, Storyman sounds like the best of friends swapping tales and jamming for the sake of jamming because that’s exactly what it is. Bush’s voice, which sounds strong and familiar throughout Storyman, is often overlooked because of the sheer ferocity of his playing––an omission that actually points to the brilliant suppleness, ease, and warmth of his vocals, which instead of drawing attention to themselves are always fully in service of the song.

Written with Jeff Black, “Transcendental Meditation Blues” recounts a long 1978 ride Bush took on a sweltering, broken-down Greyhound to see a girl named Lynn in Louisville. Today, Lynn and Bush have been married for 31 years, and the glimpse into their early courtship––layered over rolling strings––is relatable, toe-tapping, and sweet. “When I finally got to Louisville, there was Lynn, sitting in her little orange VW waiting for me,” Bush says. “You know you’re in love when you ride the Greyhound bus.”

Humanistic optimism punctuates the entire album. “Play by Your Own Rules,” co-penned with Sam Bush Band guitarist Stephen Mougin, rowdily encourages listeners to be themselves, “favor kindness over wealth,” and live fully in the moment. Written with Deborah Holland, “Everything is Possible” offers open-armed hope wrapped in reggae-infused instrumentation that matches the positivity of the lyrics’ messages.

The wryly funny “Hand Mics Killed Country Music” brings Emmylou Harris and Bush together again. Harris contributes harmony vocals on the song, which the two co-wrote. It’s a straight-ahead honky tonk shuffle––the first that Bush has ever recorded on one of his solo albums––complete with steel guitar and a trio of fiddles. “I thought the song really needed that great, old-time piano, like Pig Robbins. Then I thought, ‘Well, call Pig Robbins! Not a younger player who can sound try like him!’” The iconic session player accepted the gig and guided the bluegrass- and jazz-trained musicians through the art of creating a shuffle.

“Carcinoma Blues” has co-writer Guy Clark’s fingerprints all over its lean lines and inimitable combination of cleverness and heart. Clark and Bush have both had their bouts with cancer, and Bush wanted to write about the experience, directly and holistically. “We wrote it from the points of view of both the patient and of the loved one, who’s watching the patient go through it,” Bush says. Echoes of Jimmie Rodgers’ “TB Blues,” which Bush says “scared him as a kid” reverberate throughout the track.

Bush and Steven Brines wrote “Lefty’s Song” by letter correspondence in the 70s: The two mailed lyrics and music back and forth between Barren County and Lexington. Brines died in the 80s, and Bush lost the tape capturing the song for almost 40 years. “I couldn’t believe I found it!” he says, obviously thrilled. The true tale of a small-town newspaperman who falls in love with a traveling actress but can’t leave his deaf and mute brother behind, the song features guest vocals from Alison Krauss and a happy twist at the end.

The entire Sam Bush Band co-wrote instrumental “It’s Not What You Think,” which got its title from a disagreement about the location of the one beat. Co-penned with banjo player Scott Vestal, “Greenbrier” grew from a phrase that Bush woke up with at 4 a.m. one morning. Jon Randall Stewart started strings-soaked throwback “Bowling Green” on his own then took it to Bush because of the subject matter. “Jon Randall came over to my house and said, ‘Man, I got a song––it’s kind of about your dad,’” Bush remembers. “He played what he had, and he teared me right up. I said, ‘Come on, now!’” The finished product is an autobiographical ode to Bush’s upbringing and his father’s love of the fiddle.

Slow-burning “Where is My Love,” written with John Pennell, proves Bush should compose and play the blues more often. It’s a growling experiment in perspective and audience––Is the song’s protagonist wondering what’s wrong with him or where his lover has gone? Hint: probably both.

“I Just Wanna Feel Something”––also written with Jon Randall––explores the urge to chase love’s high before it’s too late. “Really, it’s about playing the groove and digging playing together,” Bush says. “If there is a love in it, it’s the love of playing music together.”

For Bush, that’s a love that will never die. “When we play live on stage, if people can feel the joy we’re feeling, then we have succeeded,” Bush says. “That’s the goal to me of playing music: Did the audience feel something?”
38
What's This
Advertisement