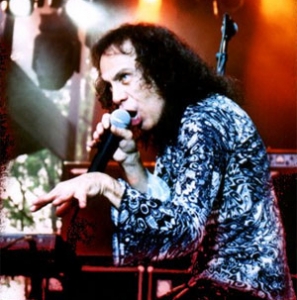 The grand wizard of classic rock. A poet of hope for the downtrodden. The single most important vocal technician in the history of heavy metal. All of these accolades have been garlanded upon the royal roar known as Ronnie James Dio.

Born in New Hampshire, USA, Ronnie first achieved recognition singing with his own band Elf. Deep Purple's Roger Glover and Ian Paice spotted him in 1972, and Elf then supported the British band on several US tours. Ronnie later sang on Roger's famed solo project "The Butterfly Ball" in 1974 and then joined Ritchie Blackmore's Rainbow. With his pioneering classical metal work in Rainbow, as well as his vocal pyrotechnics on two Black Sabbath monoliths (Heaven and Hell and Mob Rules), Ronnie used word and rhythm to seduce his way into the center ring during metal's thriving heyday.

His first solo offering, Holy Diver, was a brilliant display of melody and might that married Ronnie's immense vocal, lyrical and compositional acumen with the talents of a band chosen with almost Machiavellian insight.

Holy Diver quickly established the singer's hypnotizing skill for delivering messages that pierced the wild heart of the metal generation. Due to a wellspring of strength built from childhood struggles, Ronnie learned to soar with words, writing anthems to overcoming, paeans to personal power, and overtures to outcasts, all with a verve that stressed independence in the face of dark forces.

By the release of record #2, The Last in Line, Dio was firing on all cylinders, packing stadiums with a visual and aural symphony: a pyramid stage set complete with a three-headed cobra and fighting sphinxes, and songs that spoke to an all too prevalent middle American reality. Good versus evil was Dio's unrelenting theme, and the band's muscle bound devil mascot, amusingly known as Murray, seemed to be winning. Next up for Ronnie was his reunion with Black Sabbath for 1992's Dehumanizer. The remainder of the 90's saw Dio releasing Strange Highways (1994), Angry Machines (1996), and a live offering in Inferno/Last in Live (1998 ).
20
What's This
Advertisement