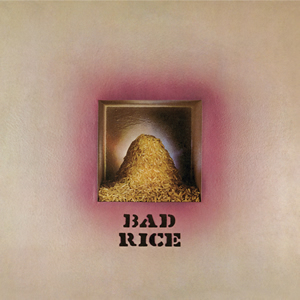 Cult classic reissued and expanded, on CD for the first time!

Between being a member of San Francisco rock group the Mystery Trend in the mid-’60s, and his later work with musical partner Scott Mathews (together known as Durocs), artist and maverick songsmith Ron Nagle made one solo album. Released in 1970, Bad Rice remains a classic showcase for Nagle’s trademark blend of Stones-y raunch, Beach Boys lilt and Newman-esque black humor.

The record included guest appearances by both Ry Cooder and Sal Valentino (Beau Brummels), and was produced and arranged by the legendary Jack Nitzsche (Phil Spector, Neil Young, Rolling Stones), along with Nagle’s mentor, legendary S.F. DJ Tom “Big Daddy” Donahue. Though released to great critical acclaim at the time, Bad Rice came and went without much impact. Those who trusted the roll that the white-hot Warner Bros. label was on at the time, picked it up and have lauded the album’s unique song craft and picaresque character sketches ever since. Thus, the cult of Bad Rice came about.

For the first time ever on CD, Omnivore Recordings is proud to present Bad Rice in expanded form for this special reissue. It includes alternative mixes and outtakes from the album, along with an entire second disc of period demos drawn from the archives of Ron Nagle, as well as detailed liner notes by longtime Nagle observer Gene Sculatti and many previously unseen photos.

A true renaissance man, Nagle has subsequently become one of the world’s foremost ceramic sculpture artists while keeping a hand in music as a songwriter for others (Barbra Streisand, The Tubes, Sammy Hagar, Dave Edmunds, and Leo Kottke, among others). Additionally, Ron worked as a sound designer in film (Cat People, The Exorcist), but it was Bad Rice that was named by the readers of Billboard magazine in the late ’90s as their most desired reissue.