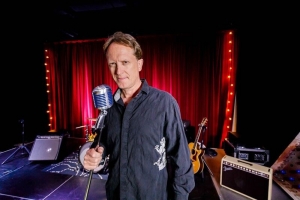 Veteran Americana singer-songwriter Roger Len Smith is back with his first album in almost nine years. Featuring ten brand new songs, Anything Goes is a beautifully-crafted, hook-laden modern rock collection that tackles many timely hot topics and, as Smith says, is his “best album yet.”

Produced by Smith and AJ Downing at Downing’s studio in Wimberley, Texas, Anything Goes features songs both topical and personal, story songs about drifters, lovers, troubadours and other romantics, as well as social and political commentary both incisive (“House Of Cards,” “Empty”) and universal (“Raining On A Sunny Day,” the title track).

Smith released his first-ever music video for the title song, “Anything Goes,” in late 2017 as a teaser for the new record. A poignant and powerful ballad in 3/4 time, it addresses the chaos and division that has gripped America and beyond since the 2016 election in dramatic fashion without getting dogmatic or name-checking. The video was beautifully put together by The Belle Sounds' Noelle Hampton, who also sings harmony on the track.

The ten songs on Anything Goes – Smith’s sixth album – follow his penchant for combining a variety of tempos and styles with catch melodies and strong lyrics. From the barn-burning intro of the J. J. Cale-inspired “Can’t Wait For Another Day” to the folksy darkness of “House Of Cards” to the beautiful "Raining On A Sunny Day" to the playful “Zander & Zoey,” an uptempo number named for Smith’s children, the record has a creative mix of moods.

There’s also a great amount of stellar guest musicians on this album. Foo Fighters keyboardist Rami Jaffee highlights the single, “Raining On A Sunny Day” with clever and whimsical vibe tones. The heavily in-demand Kim Deschamps provides many energetic and searing solos on half of the record with his masterful pedal steel, lap steel and dobro playing. The dynamic and highly talented musical couple that is Noelle Hampton and Andre Moran provide beautiful contributions via Moran’s deft, atmospheric electric guitar and Hampton’s sweet and seamless harmonies. Drummer Jimmy Spencer anchors the recording with his rock solid, creative drumming.