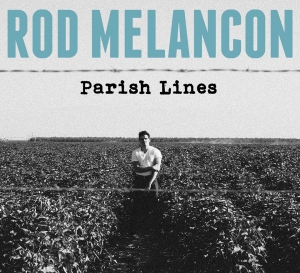 The mystery that is the music of the Louisiana bayou country has found few new artists who can honestly be regarded as champions of this unique American art form. There is a long ancestry of artists however, from the state itself, who have brought the music to the fore, like the funky country blues of Tony Joe White and the Cajun celebration of Doug Kershaw. Other than Lead Belly, few other artists have emerged from the swampy terrain of South Louisiana to national success.

But today, singer-songwriter Rod Melancon is finding an audience and building a legacy based on his quarter century of life inside the parish lines of his hometown. His second full-album release, PARISH LINES, adds a new twist to Rod Melancon’s growing musical reputation. He still has an Americana base, but, with PARISH LINES, Melancon moves through country to a harder, alternative rock sound.

Raised just a stone’s throw from Angola State Prison, home to Lead Belly and the setting of the book and film Dead Man Walking, Melancon absorbed the swamps and bayous of his childhood. With a classic American appearance that could easily find him cast as Elvis or James Dean in a biopic, Melancon traveled to Los Angeles intending to become a professional actor.

But a chance encounter with his grandfather and Hank Williams would steer his life in an unexpected direction. When he returned to Louisiana from Los Angeles for the Christmas holiday, Melancon saw his grandfather’s tears as he listened to a Hank Williams record Melancon had given him. Those tears touched young Melancon to his core. He knew then that he wanted to touch people through music, the way the Hank Williams once did.

“I grew up with a strong love of film. It was originally what I came to L.A. to do,” Melancon says. “But the thing about songwriting is that you are a one man crew: the director, the screenwriter and the actor. What could be better than that?”

On his return to L.A. Melancon spent months in his small apartment discovering his own voice as a writer and a singer. He then went to work with a group of seasoned L.A. session veterans – including Chad Watson, Dean Parks, Vern Monnett and Don Heffington – at Richard Barron’s Sonora Studio. Melancon’s debut record, released in June of 2012, was aptly titled, MY FAMILY NAME. It is an album that digs deep into his Louisiana roots where he finds tales of family, life, death, and redemption. Songs like, “Long Lost Friend”, and “Lord Knows”, echo the best work of early Johnny Cash and Waylon Jennings, steeped in a solid country sound with mandolins, steel guitars, and accordions.

Over the last few years, Melancon has made his bones in the live L.A. Americana club scene, including the Grand Old Echo at the creatively vibrant Echoplex. During that time he honed his stage craft from a somewhat hesitant performer to a sweaty, Beatles-in-Hamburg kind of passion that is growing into his unique performances. However he approached it, Melancon’s emerging style made it clear to everyone who saw it that his entire soul had been surrendered to the music.

When Nashville came knocking through the person of Dave Cobb (producer for Jamey Johnson and Shooter Jennings), Rod answered with the gritty, “Mad Talkin’ Man.” His cover of Don Covay’s “Have Mercy” gave the artist a chance to wrap his voice around an R&B classic that was also covered by The Rolling Stones back in the day. The result of the Nashville sessions, which included Jamey Johnson’s band, showed Melancon’s growth and versatility as a studio artist.

On his sophomore effort there is a new approach, thanks to the adventurous production of Dwight Yoakum guitarist and singer-songwriter Brian Whelan. As producer, Whelan fills PARISH LINES with an exciting raw edge that rocks as it drives the songs home. If MY FAMILY NAME signaled the arrival of a young artist rooted in country, PARISH LINES finds him breaking out into a driving, uncompromising rock sound while his heart remains solidly South Louisiana country in lyrics and sensibility.

“I wanted to build off of the traditional sound of my first album. I wanted it to be far from predictable. Brian Whelan did just that,” Rod says.

The reinvention of “South Louisian’” and his single “Mad Talkin’ Man” cuts closer to the bone than the previous versions. What remains are new, original songs that extend his Louisiana storytelling craft. The Buddy Holly-like “Cushing Avenue” conveys the simple innocence of home town memories. The Springsteen-inspired “Duck Festival Queen” expertly tells a tale of love and murder, while “Curve Lounge” resonates with lonesome slide guitars and a spare simple arrangement. The hard rocking “Wanna Go For A Ride” plays like Jeff Beck and Duane Eddy meet Elvis. It’s like a session summit of great rockabilly and blues on some obscure night in the early 50s Sun Studios in Memphis – you can almost see Sam Phillips peering out from the control booth with an approving Cheshire grin.

It seems clear that in the new world of Americana music, where so much is becoming pre-packaged and manufactured, Rod Melancon is an emerging artist to be reckoned with. His story rises from the lowlands of South Louisiana to Los Angeles’ Echo Park, singing in the shadows of Chavez Ravine. On PARISH LINES Rod Melancon has captured a unique and real piece of the American spirit.
9
What's This
Advertisement