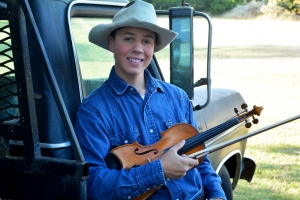 
https://www.youtube.com/watch?v=EKBlFvCBwdI ("There'll Be Some Changes Made" Video)

World Champion fiddler, Ridge Roberts is a seventeen-year-old Texas native who breathes fiddling. When he was seven, his dad, John, taught him the basics until Ridge surpassed him. He then turned to the internet to find more fiddle tunes to learn, and along the way he learned about the history of the music and the pioneers of Texas style fiddling who would become his heroes. For the next two years, he was mostly self-taught until 2012 when Robin Houghton, a family friend stepped in. As Ridge progressed, Robin knew that it was only a matter of time until Ridge would need a fiddle teacher. The search was on!

In 2013 Ridge entered his first fiddle contest, the Johnson County Old Settlers Reunion in Alvarado, Texas. It was there he met Michelle Kuhlman, who unbeknownst to the Roberts’, spoke of Ridge to Joey and Sherry McKenzie. After several phone calls, a jam was set. That first meeting would be pivotal for Ridge. Over the next five years, Ridge developed and honed his craft under Joey’s guidance. Since then, many things have changed but their special friendship bound by their mutual love and passion for their music and their craft remains the same.

Ridge has been performing for civic organizations and special events in Granbury since he was 9-years old, and he continues to perform around town when requested. In 2013 he entered and won his first fiddle contest at the age of 10. Since then, he has gone on to compete in and win many more contests, with several notable championship titles. From 2014 thru 2016, Ridge and Robin Houghton played weekly at nursing homes and senior centers all over the Metroplex, from Fort Worth to Dallas and across seven counties, collecting smiles everywhere they went. From 2016 until 2019 he played weekly in a Country band at a local country club. It was here that his love for old, classic, and traditional country music found its way into his heart. Since 2019, he has been the fiddler for the Western swing/traditional country band, The Western Flyers.

Ridge also plays guitar, sings, writes songs, and composes. He continues to hone his musical gifts with plans to continue his musical career after graduating.

Ridge Roberts has three brothers and is the second son of John and Cindy Roberts. He is a Junior at North Central Texas Academy, also known as Happy Hill Farm. He enjoys reading, writing, and hanging out with friends. He loves all things vintage, especially Country music. Since his introduction to fiddling, Ridge has been and will always be a life-long student of music and its history.