Rick Lang - Thats What I Love About Christmas 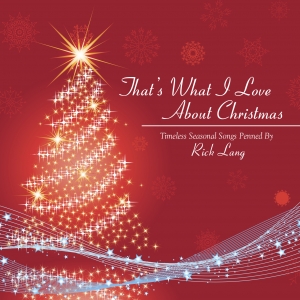 Living in New England, I have had an ongoing love affair with winter and the Christmas season as far back as I can remember. Images of a fresh fallen snow, icicles glistening in the sun, frost on the window, colored Christmas lights blinking on the tree, listening to my favorite Christmas songs on the radio, warming myself around the fireplace, bring back fond memories going back to the days of my childhood. Thinking back on those times provided a great source of inspiration that eventually led me to write several of the songs on this album.

The IMEA annual awards show was held on Saturday October, 24th 2015, 7:00 PM at the Marietta Performing Arts Center, Marietta Georgia. The IMEA presented awards in various categories and several genres, honoring the very best in independent music & theatre. Award nominees as well as performers came from all across the US as well as abroad.

We are excited to share the wonderful news that Rick was honored with the award For Holiday Song Of The Year. The song "That's What I Love About Christmas", co-written with Stephen Mougin, was the title cut of Rick's new Christmas/Seasonal album of the same name, and released on RLM records Oct 7, 2014. Produced and engineered by Stephen Mougin (Dark Shadow Recording) the award-winning track features: Annie Sellick, lead vocals;Joe Davidian, piano; Todd Parks, bass; Chris Brown, drums.

"That's What I Love About Christmas" also received an IMEA award
nomination for 2015 Holiday Album Of The Year.

The IMEA (International Music & Entertainment Association) is a non-profit organization whose purpose is to honor and recognize the best in independent music, theatre and live entertainment, internationally.


The Story Behind "That's What I Love About Christmas"

It has been twelve years since the release of "The Season Of My Heart", my first every Christmas album. Every winter since then I have continued to write new Christmas and Seasonal material.
In the spring of 2013 I sent work tapes of a couple of the tunes to my good friend & producer Stephen Mougin with the idea of demo-ing the songs. At that point I thought it would be a few years before I attempted recording another Christmas album.

Upon listening to the songs, Stephen suggested they might sound nice with a jazz treatment. That approach was new to me.... as most of my songwriting to that point had been pretty much acoustic bluegrass & gospel oriented.
We agreed to give it a shot. Stephen then assembled a jazz trio featuring Todd Parks on Bass, Chris Brown on drums, Pat Bergeson on guitar and recorded "Christmas Every Day Of The Year" and "Looks Like Snow", with Stephen singing on both. What happened next changed everything.
The jazz music treatment sounded very natural for both numbers. I had never envisioned the songs sounding liked that ....but absolutely loved it!
That is when the idea of recording a full Christmas album came to light. Stephen went ahead and selected songs from my Christmas/Seasonal catalog to record, some of which would need to be re-written and/or re-arranged with more of a jazz and classic Christmas feel.
Stephen and I got together and wrote "That's What I Love About Christmas" to complete the collection.

There were four recording sessions in all, that took place from March to May of 2013. Stephen did a masterful job putting it all together and assembling the wonderful group of musicians and singers featured on this album. The performances were really incredible especially considering it was all recorded live.
Later we would add some harmony and background vocal parts on a few of the tunes. The making of this album was a joy from beginning to end. It was a fresh new sound, a contrast to any album I had recorded in the past. In the process we were able to capture the feel of some of the classic Christmas standards of the '30s and '40s. I'm so very thankful for this opportunity to record this new collection to share these songs with others. Happy Holidays!!!

A native of New Hampshire, award-winning songwriter Rick Lang has become well known in the Bluegrass community and beyond. His songs have been covered by some of the most renowned artists in Bluegrass
music, Southern Gospel and even the Jazz world. Over 70 song cuts to his credit, the number keeps growing each year. Although most of his songs are self-composed, Rick has collaborated with several other notable writers in the Bluegrass and Gospel music
field in recent years.

Rick has released four studio recordings of his own to date. Each have featured all original Rick Lang compositions.

Rick's first Christmas album "The Season Of My Heart" (2003), was voted one of the top twenty five albums of the year by the National Folk Radio survey.

"Look To The Light", an all Gospel CD released in 2010 on Rural Rhythm Christian (RRC) was nominated for a GMA (Gospel Music Association) Dove Award as well as an IBMA (International Bluegrass Music Association) Gospel Recorded Event Of The Year.

In 2012 Rick recorded and released the Christmas single "Little Did They Know" on the Rural Rhythm Records Label....featuring Jana Mougin on vocals.

Rick's 2nd Christmas/Seasonal album, "That's What I Love About Christmas" was released on Oct 7, 2014 on his own RLM Music label. Unlike his previous Holiday recording, this one has a heavy jazz influence, some of the songs having the feel of some of the classic
Christmas songs of the '30s and '40s.

The title cut, written by Rick and Stephen Mougin, was awarded 2015 Holiday Song Of The Year by the IMEA (International Music & Entertainment Association) at their annual awards show at the Marietta Performing Arts Center, Marietta GA Saturday Oct 24, 2015.

In addition to a busy songwriting schedule, Rick does some freelance writing for Bluegrass Unlimited Magazine, conducts songwriting workshops, one-on-one songwriting lessons, and still actively performs
on occasion. Rick is an alumni of the IBMA eadership Bluegrass program (class of 2012), and is currently a member of the IBMA Songwriter committee.