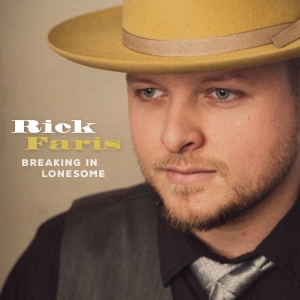 "Rick Faris has consistently wowed me with his powerful vocals and virtuoso mandolin and guitar playing over the last few years with Special Consensus.  He was playing mandolin when I first saw him and I immediately noticed he is a great singer live--suppose it shouldn't have surprised anyone when he switched to guitar and was just as proficient and nimble.  His range makes him a natural tenor, but his lead singing is convincing and expressive.  And on top of all this, he's an outstanding luthier, having built a number of great guitars--including those played on this record.  In short, I thought of the guy as the vanguard of younger musicians who are carrying Bluegrass forward.

But now his solo record shows me that he's put it all together.  Turns out he's also a thoughtful songwriter.  He wrote or co-wrote 11 of the 12 songs on Breaking in Lonesome, and they run the gamut from Jimmie Rodgers-style jazzy ditties ("Mississippi Steamboat Blues"), straigh-ahead waltzes ("Wrong Done Right") to contemporary Bluegrass ("If the Kansas River Can"), cool instrumentals ("Stoneman's Raid"), blazing fast 'grass ("Breaking in Lonesome"), a spooky traditional gospel song featuring Shawn Lane's soulful tenor ("Matthew and Mark's Wisdom") and a contemporary Bluegrass gospel song ("Faith in Man").  The lone cover, Aaron Bibelhouser, Thomm Jutz and Milan Miller's "How Long," fits right in.  Most of these finely crafted songs feature the rocking core band of Rick on guitar and lead vocals, Justin Moses on banjo and tenor vocal, Eddie Faris on bass and baritone vocal, Laura Orshaw on fiddle, and Harry Clark on mandolin.  "Never is a Long Time" and the swingy "Honeybabe" feature Special C and make it easy to see why this version of the band has been so decorated.

Bluegrass music might be entering its 9th decade, but Breaking in Lonesome proves it's more vital than ever, and this project is a perfect showcase for one of its truly bright lights".
-Tim Stafford (Blue Highway)

Rick Faris lives in Topeka, Kansas but tours professionally with the world trotting, Grammy-Nominated Bluegrass band Special Consensus from Chicago. Special Consensus has won several International Bluegrass Music Association (IBMA) Awards. The most recent awards are the 2018 Instrumental Recorded Performance of the Year (Squirrel Hunters) and 2018 Album of the Year (Rivers and Roads). Rick has just signed with Dark Shadow Recording and will be releasing his first ever solo record in 2019! The best place to see Rick live is on tour with Special Consensus with whom he will continue to tour.

Rick started out in his family band the Faris Family at the age of 7. He got a head start in music from his father Bob Faris (a professional touring musician in his own right playing with the likes of Reba McEntire on the Opry and other well-known stages). The family of six consisting of Mom, Dad, Rick and his three brothers JimBob, Eddie and John toured extensively for years honing their craft. Rick joined Special Consensus in December of '09 and has been on five records with the band. He sang and played mandolin on his first three records with Special Consensus (35, Scratch Gravel Road and Country Boy: A Bluegrass Tribute to John Denver). He then switched to the guitar for the 4th and 5th records (Long I Ride and Rivers and Roads) Rick is known for his a clear brilliant tenor voice that lends itself to all emotions of the music. He has a strong, unique lead vocal and a guitar persona that sets him apart from the rest. While not touring, he spends a large amount of time with his family and honing his skills as a Luthier (one who builds and repairs stringed instruments).
21
What's This
Advertisement