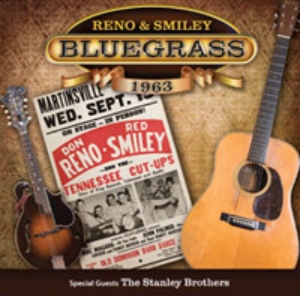 “BLUEGRASS 1963” , produced by Ronnie Reno is a most welcomed treasure for those lucky enough to have seen and heard RENO & SMILEY in its prime perform on their legendary “Top O’ The Morning” daily TV show in Roanoke, VA in the early 60’s.

This 18 song collection features their long time sidemen THE TENNESSEE CUT-UPS; Mac Magaha on fiddle and John Palmer on bass, plus guitarist Steve Chapman and a young Ronnie Reno on mandolin. There are fine renditions of their classics like “I Know You’re Married”, “I’m The Talk Of The Town”, “Love Please Come Home” , “ I Wouldn’t’ Change You If I Could” and ”I’m Using My Bible For A Roadmap” and some standards including “Down Yonder”, “Whispering Hope”, “Fisher’s Hornpipe”, “Panhandle Country” and the popular TV theme song “Ballad Of Jed Clampett”.

Also featured on this album are guest spots from none other than THE STANLEY BROTHERS; Ralph & Carter performing the classics “In The Pines”, “Nine Pound Hammer” and Ralph joins Don Reno for a twin banjo workout on “Home Sweet Home”. A special album highlight is the performance of “Over In The Gloryland” with RALPH & CARTER STANLEY joined by RENO & SMILEY and their full band, (enough said!).

Album Producer Ronnie Reno writes:
“As I look back some 47 years ago when we recorded this I can’t help but think of my feelings on the music we were playing. I was 16, playing mandolin in a great band on TV and recording hit records. I guess I thought all bands sounded and played like Reno and Smiley. Little did I know I was playing in one of the greatest bluegrass bands of all time?

I was lucky to be able to hang on to these TV show recordings because so much musical history has been erased. These were wonderful years for bluegrass and I know that you will enjoy the music as much as I was in being a part of the history of Bluegrass. I hope you agree with me that this is truly a forgotten treasure and a memory that will live on forever.”