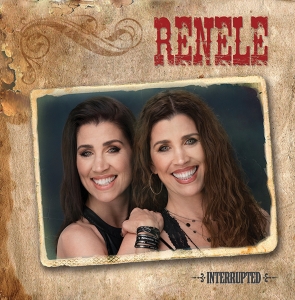 
‘Renele’ is an Americana/Country-Rock project the DiSisto sisters have cultivated for some time now and have finally released their maiden project with their first CD ‘INTERRUPTED.’ Filled with their grass roots rock & roll upbringing with additional Blues and Folk overtones: like a fine wine this material that has aged so, so well. ‘Renele’ offers a CD with very melodic and infectious songs that hit you where a woman lives. MEG Records is so very excited to bring to you ‘RENELE.’

A proud daughter of a loving Italian / American family, Renee was born in New Rochelle, New York, but grew up in Mamaroneck. While in grade school she attended dance lessons and picked up the clarinet. At age thirteen she began to learn guitar. Little did she know these first three simples steps of music would shape her life.

As Renee’ found her music in her youth, the road was mostly paved with the songs of The Beatles. Later came her love for Aerosmith, Heart and Melissa Etheridge. She began to write songs initially influenced by the Indigo Girls, another of her favorite influences.

Renee’ would leave Mamaroneck with her sister Michele to take on the world of music at the renowned Berklee College of Music in Boston, where she pursued her dreams, but of course was met with a prejudice and resistance from the jazz and progressive arts students, which made her often wonder, does she belong. But, her Italian stick-to-itiveness helped her forge ahead to find who and what she was as an artist.

After Boston and Bucks County Renee’ and her sister traveled cross-country to Los Angeles where they soon ingratiate themselves to the hot LA music scene of the 90s and early 2000s performing at such clubs as The Whisky and the Troubadour on Sunset Blvd.

A new city brought new inspirations and melodies and Renee’ began to write in earnest. Drawing from her love of her major influences, she filtered a long line of thoughts and inspirations into songs that defined her, that spoke for both Michele and her and lent a voice to their music that needed to be shared.

Michele began her life long relationship with all things percussion at the age of 9.
While in class her teacher presented a list of musical instruments children could pick to learn. Michele chose the flute, but unfortunately it was too expensive at the time. Her second choice was the drums and it didn’t take long to get hooked.

Much like her sister, she surrounded herself with the music of the day listening mostly to rock & roll, but as she grew to love her instrument, the influences of Gene Krupa and Kenny Aronoff also seeped into her musical veins. Other influences such as Stuart Copeland rounded out what was to become a life long love of drumming.

Michele took the traditional journey of any aspiring drummer and joined the high school band and of course played in a few neighborhood experiments before she headed off to Berklee College of Music in Boston. There she would refine her passion and solidified her own approach and style, much under the mentorship of Tommy Campbell.

Soon after arriving in Los Angeles, Michele expanded her perspective on all things percussion, as she began to take lessons from a new mentor: the late great master Jack LeCompte.

Michele’s skills earned her spots with numerous bands, frequenting such venues as the Whisky, the Troubadour and many others. Michele currently resides in Palm Beach Gardens Florida with her husband and performs throughout the region in numerous projects.